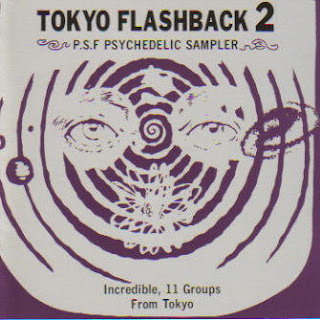 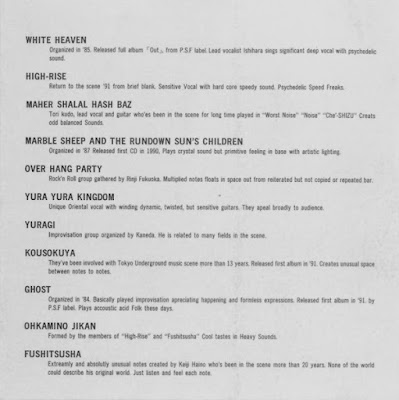 I like how it says 'Incredible,...11 Groups from Tokyo!!!??.....they had that many?
I'm sure the inhabitants of Tokyo already knew they had far more than 11 groups,but as westerners,especially comedy western Rock musicians, famously, can't count beyond 11,its displayed on the cover....in English.
In the early 90's,I, for one, had no idea Japan had any pop groups at all, never mind this brand of raw noisy psychedelic fuzz.This is where compilations come into their own,as this series of Jap comps virtually discovered this scene by proxy.Then us western types could claim to be weird by playing their mates some wild Japanese group that they'd never heard of,and go away envious of how on the cusp you were. The aural politics of Envy,or musical socialism in action.....no groups are created equal;unless they're on a compilation.
DOWNLOAD to rediscover the bands that you'd forgotten you'd discovered in 1992 HERE!
Posted by Jonny Zchivago at 13:25

Easily the best in the series.

Hi Jonny,
Zip file is missing track 8, Kousokuya.
Thanks again for the fantastic uploads :-)
I just got Tokyo Flashback Volume 1 on Black Editions vinyl, they did an excellent job on the release, sound and packaging is really nice.

Great listening. But it seems tracks 3 and 8 are missing.