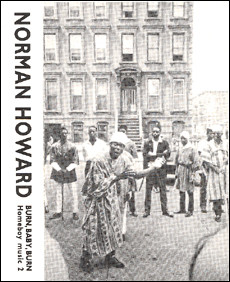 Luckily for you Americans out there, The UK, appreciates your music culture more than you do,or don't as is the case,and this session recorded in November 1968 by former Ayler associates Norman Howard and Joe Phillips,was originally Intended to be released on ESP Disk , in 1969, but was typically shelved and forgotten, until some obscure limey cassette label decided to release a cassette of the full session for English hipsters to swap their hard earned Pounds for. Without Japan,and the northern European market,and especially France, all that Free Jazz that makes us seem passably intelligent would have been thrown away in some dumpster in Kentucky decades ago,or reconstituted as Grits and Twinkies for a Los Angeles Food Bank financed by the Republican party.
This tape is from the more laid back dope smoking end of the Free Jazz drug spectrometer. Made for your next Fondue Soirée with your college professor friends and cool twenty-first century designer label Beatniks.
PS...there's another tape to follow,to complete your valuable Norman Howard collection....click here!
Info for those who care:
Norman Howard: trumpet
Joe Phillips (a.k.a. Yusef Mumin): alto saxophone
Walter Cliff: bass
Corney Millsap: drums
recorded cleveland, nov. 1968
Tracklist:

a Los Angeles Food Bank financed by the Republican party... That's funny, like they'd willingly spend a dime on 'those people' 'It's bad enough they're allowed to vote.' Apparently half of the states, the ones w/ GOPQ administrations and legislatures are currently working overtime to pass new law making it harder for 'those people' to vote. Swell.

tHERE'S dRUGS IN DEM GRITS as well as reconstituted animal waste....it goes against my philosophy but thought i'd explain my Irony if it got misconstrued.
Love from Donald Z Trump.

Thank you very much for this too, and all those Byg albums that I've been waiting to hear for a while!
Cheers