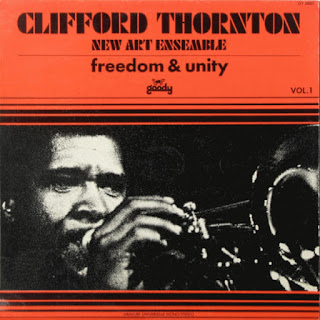 This one was actually recorded in New York 1967 rather than France,which I guess Cliff didn't relocate to until his Draft number came up for Vietnam in '69. He wasn't rich enough to pay a doctor to help him dodge the draft, like Donald Trump was,so,logically,he avoided the madness by being an American Free Jazzer in France...why not, everyone else was over there at the time.
This outing seems more dated than his output post 1969,a tad more jazzier than Cliff's 1970's stuff,but jolly fine nonetheless.

What does a lesbian couple do on their period?

You are crushing it right now! Kudos, and thank you from Detroit.

...and the Cliff hits keep on coming, well played.

Although less abrasive than the also brilliant «The Panther And The Lash» I don’t hear it as dated. There’s a strange kind of beauty to some of the calmer post-Coltrane free jazz albums (this is in fact recorded the day after his funeral) that sort of floats endlessly along for about an hour without any total blowouts - or recognizable themes. Btw: Have you seen this interview with Nelson Johnson refgarding the drummer on this album, Harold (Nunding) Avent (his only recording)? Seems he was a FBI-informer/agent and a Black Panther-infiltrator. Seriously intriguing stuff:
https://www.facebook.com/296746091026/posts/harold-nunding-avent-appears-on-cliffords-first-album-freedom-unity-which-was-re/10156905113741027/