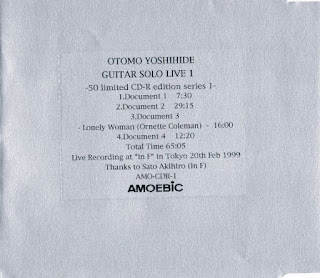 Ay Up, Ornette Coleman gets name-dropped!? This must be too intelligent for us?
Sampler toting Ground Zero free jazzer and turntablist Otomo Yoshide, shows us what he can and can't do on the ol' six string.
As for the 'Cover Version',he could have been covering anything as far as i can hear? Did I hear a hint of Aqua's smash-hit about Barbie partying......well possibly,but maybe it's more Klaus Barbie partying rather than the top selling gender stereotyping tool for square moms and pops everywhere.
Otomo suitably makes his guitar,"recorded in 'F'" it says here, scream for help as he strangles its slender neck with various devices rattling its vertebrae like a ligature garroting the neck of proper music;Derek Bailey in a bad mood style. So maybe i'll seem like a clever sod too, record my vacuum cleaner and call it a cover of Albert Ayler's 'Bells'.
This was limited to 50 copies it reckons,of which this isn't one.It's impossible to have limited editions these days Otomo,didn't you know that?
Now to get back to my current Dark Folk obsession and weep myself to sleep during my ongoing existential crisis like the snowflake i wanna be. In fact i may do an Otomo Yoshihide version of Sandy Denny's "Late November" later on before I open the first can of strong continental lager and kill myself.

Hy Diy,
I like your site, I like your music, I'm above all fan of your prose and tongue in cheek humour. So don't kill yourself. You're not alone. I've read somewhere you leave in France ? Probably why your (Oppenheimer) analysis about french music and people are so clever...
Lo from Toulouse

Salut Lo from Toulouse....wasn't there a singer called Vaughan Toulouse in the eighties?....Yeah Department S thats him...."Is Vic There?".
Yeah i'm in France near Montpellier. Know Toulouse quiet well,played several Cricket Matches there, and got pissed in the town centre on several grim occasions. Had to play with a headache from Hell and shaking from alchol withdrawal....yep...we lost. Stayed in a hotel once next door to a place called "The Pink Palace"...lots of putes hanging around.
Hope you weren't insulted by my comments on french people and music,I know the French don't like being laughed at, I love you all really. Likely i'll be kicked out soon anyway,with this silly Brexit fallout shit!

this website is gold. youve managed to merge music and literature through metaphor, what is a cover? like pierre menard in borges, replication, what does it mean?