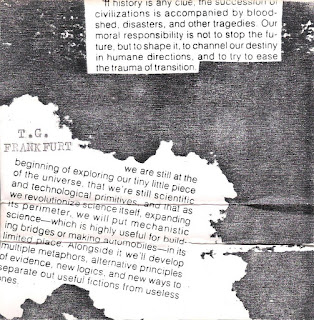 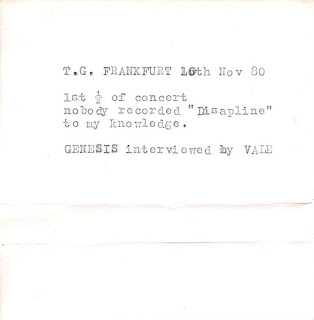 A untitled bootleg,not listed on Discogs, from TG's gig in Frankfurt from when they started spreading the Industrial gospel live beyond the UK's shores. Its from the "Heathern Earth" period,so a lot of the set-list appears on many of their recorded appearences around this time....improvisation being binned off for what one has to say was a more commercially orientated direction for the Throbbers.
Nowadays, of course, everyone has a TG record somewhere in their house,filed next to Elton John,and K-Pop bands can be seen wearing TG t-shirts,the Ramones being now discarded as a Boy-Band cliche...surely not?
The 'interview',if you can call it that, consists of GP-O going off on one of his monologues full of ,what we would now call, 'conspiracy theories, and trite observations on human behaviour, with someone going 'Mmm' at the end of every sentence,seemingly agreeing with everything the master says.
A version of 'Discipline',from the Frankfurt concert one assumes, crops up mid-interview for some reason,probably to illustrate Gen's self-effacing fake-humility in describing himself as someone crawling on the floor shouting Discipline a lot. Don't you just love humble pop-stars?

Strange timing here. I have actually been making my way through all of the live shows recently, and literally just listened to this one yesterday. Not one of the better ones, unfortunately. Crowd and band both sound bored beyond belief. What a night, all night.

Funny you should mention Elton John - P-Orridge once claimed that Reg was one of the 700-ish owners of the first press of Second Annual Report. Zappa too, if Gen was (trying to keep a straight face here) to be believed.

@Tanith - I do an annual trek through TG24 & TG+ too (both of which I totally, definitely acquired via legal means). My favourite stretch is '77 through '78, every show's an eargasm of sound. I reckon they start to get a bit samey around the point where I realise I know the "toilet chain swallower" monologue off by heart, but there's definitely some in the Heathen Earth era that are stormers.

If it has a barcode or if the logo is readable then it is no good.
Could you imagine them playing Germanystan now? Bwahaha!
The snowflakes would cry in their soy latte.

@Alan Burns
Reg has always held a keen interest in the less palatable ends of the pop'n'rock'n'roll biscuit,so i am not surprised that hes has a first pressing TG debut. His music induces in myself the same reaction that TG's Music instigated in a lot of mum an dad's...although my parents seemed immune.We all have to make a living don't we. I have to make cute mice doing silly things for a living,the equivalent of Sir Elton's music,yet I am allowed to enjoy some TG every now and again. I sold my copy of second annual report years ago to some girl in kentucky for 50 quid.....i know don't say it.....property is theft.

I seem to recall some famous person who just ordered one of his employees to buy copies of any new records that looked interesting. Could be Elton? My original Second Annual Report is in rather battered condition, I remember getting it and “Crossing The Red Sea With The Adverts” on the same day.

Odd thing: last night I listened to this, in which Gen sings a bit of “Strangers In The Night”. Later I watched episode one of the BBC’s Law And Order, which I’d never seen before. There’s a scene in it where detective Fred Pyall is in a cell persuading a villain that he’s better pleading guilty and saving everyone trouble. In the background someone whistles “Strangers In The Night”. An example of what the noted philosopher Sting would call synchronicity?

I always knew Sting was a Cult.....i was thinking that just before reading this comment,,,again....Synchronicity in action.

Not only Elton, Peter Gabriel (Ex Genesis) also drove up to London town one day to get himself a copy of the 2cnd Annual Report

I think in at least Gabriel's case, it was more to do with market research on how to be taken seriously rather than wanting to listen to some credible music...or non-music.This is the man who is responsible for Global Music being present in every middle class home in the west after all!

The Interview i look forward to, in the meantime here is the CD version of the show from the TG + Boxset:https://workupload.com/file/3yL8mtqFSET