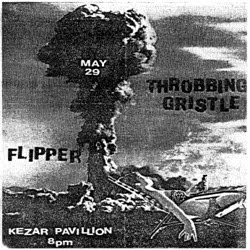 TG's last gig, supported by junkie underground rock stars Flipper I notice?An interesting juxtapose?This was released as "The Mission Of Dead Souls" on mute or something,but was edited and messed about with, so one has provided the full untampered concert instead.Should give all you noise specialists something to discuss,along the lines of 'Who's the Noisiest',and knows the noisier ones.Y'know, grown up discussions like that.
That was IT for TG,and also I think that's IT as far as genuine TG recordings are concerned,although don't count on it.There are some fake recordings from 1975/6 that GP-O put forward as the real deal,to try and earn some cash for him/herself,but don't bother....rather crap...and mostly faked,probably by the man himself.
Tracklisting:
Side A (45:22)
Side B (23:58)
DOWNLOAD the mission's termination in 'Frisco HERE!
Posted by Jonny Zchivago at 12:46

i was there, IT WAS GREAT!
Church Police were as underground rock as you could get
Flipper were wasted off their asses
TG cured my cold!

Some of that Dossier stuff, which is what you're referring to, isn't that bad. I mean, it's certainly better than the Albrecht sessions and those early Best Of tapes. But that's not saying a whole hell of a lot. But it was also definitely all the result of Gen being in full on huckster mode by then.

Evil Hitler-SS Nazi Gestapo Führers and Russian hackers fight over my prized Joy Division butt plug collection.
Is it true that an art gallery once hosted the used tampons of Cosey TF?

Indeed Morton, I think it was that coum transmissions night at the ICA London that included CTF's used tampons. A lovely piece of art, full of kudos and sensitivity.

Tampons and death camps. I recently stumbled upon an old lengthy email chain in which I was corresponding with David Tibet (<<< dubbed thusly by Gen.P. Megson)/Current 93 about Nag Hammadi texts and Gnostic scriptures--how does one go from Nazis and tampons to that? He kinda dug my solo shit (and some poster I had made? or maybe it was a poster a friend made for my dog's surgery benefit?) and a friend of mine was going to book a US tour for his wife at the time, Andrea Degens--she sings on that one Dirty Three record. Problem was, she wanted several thousand dollar guarantees for _each show_ and that just doesn't happen in the US (unless yer Taylor Swift or something), so it all fell to shit. Then they divorced. Just think: I could have become a part of the TG extended family.

@parmalee....You're not posh enough to be part of the TG Family tree.Who do you think you are?

I could have been a bastard offspring of one of their live-in servants who strongly resembled the severely retarded and rape-y rightful heir to the throne. They clandestinely swap him for me, locking the rape-y, retarded royal away in a subterranean dungeon, while I ascend to power and glory in his place and swiftly usher in a new era wherein the proles and lumpen-proles become the true masters.