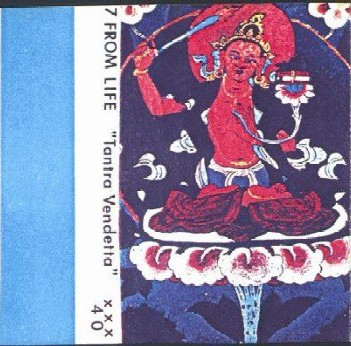 "Nostalgia is an act of Cowardice", says Lawrence Van Horn on the insert for this score for a Ballet about the Chinese invasion of Tibet. Whether its pro or anti-Tibet is anyone's guess. I may run a small opinion poll,....For the Occupation; Against the Occupation; Occupation,what Occupation?;or Don't care!,are your choices......I rather think 'Occupation,what Occupation?, would win comfortably, with 'Don't Care!' clear in second place.
Whenever a left field underground artist starts writing music for a Modern Ballet, it's a sign that he's finished as a creative force.
As Nostalgia is now a form of Cowardice,according to the philosopher that is L. Van Horn, then this blog is full of Cowards,and I don't like being called a Coward ,mainly becuse I am a Coward;and let's face it, this Blog overfloweth with Nostalgia......otherwise why the hell would we be listening to a bunch of 35 year old cassettes by Lawrence Van 'me?A Coward, Naaah' Horn? Nostagia for the invasion and occupation of Tibet doesn't seem to bother him one bit.
The music itself is like walking through a fog of tear gas during a slow motion riot....which in itself is a kind of Modern Ballet.Actually its a Ballet i'd probably go and see,as long as it's coreographed by actual rioters.It can start off with a real innocent man being shot in the back by some dumb Cops,then take it from there until the theatre is in flames.
Tracklist:

Posting up shows that you are not a coward as does listening to music that would make most "normies" call for a cancel session on TwatFaceGram.
The industrial blogs are the best thing going as everything else is just stale.
Many miles in the rearview and many more to go, keep on.