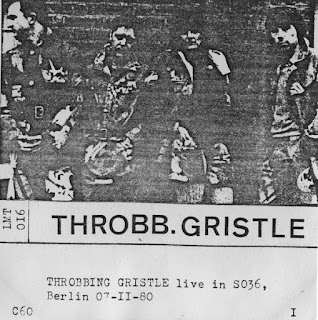 If there was a town that was made for Throbbing Gristle it would have to be West Berlin before the wall came down. Can't see 'Throbb.Gristle' using Truro (Cornwall UK), or some lovely cottagey village in the Cotswolds as a backdrop to their sounds.
So our anti-rock heroes got to play two nights in Berlin did they?
I can imagine all the future Berlin Geniale Dilletanten and Industrial arty celebrities, like Die Tödliche Doris, or various members of Malaria to have hung out at both of these TG appearences at the SO36 club.
"Ohhhhh, look over there by the bogs....isn't that Blixa Bargeld?" A gothette student was heard to exclaim excitedly. Blixa signed her copy of 'Kollaps' that she just bought in reception;which would have been difficult because it never came out until a year after this gig....not sure if 'Gig' is an appropriate adjective either, with its 'rock' connotations.....alas, but it is,as 'Gig' comes from prime TG influences, Beatnik culture and above all, The Beat Poets.So, 'Gig' it will be.
Its a sound-desk recording,as by this time TG could certainly afford some decent equipment.So, we have a semi-improvised set that would have made a better "Heathern Earth",plus a version of that perenial family favourite "Discipline",which I think was used as a bonus track on one of the CD reissues was it not?
The second 'gig' follows tomorrow,to enable you to compare and contrast live TG in their twilight years.The so-named "Destroyers of Civilisation" were no longer the potent force they had been,and were to terminate their mission six months later and go onto lesser,but more lucrative, projects,like the awful Psychic TV,and the even more awful Chris and Cosey.....the exceptions being late period Coil of course.

I'm going to go all super nerd here I'm afraid, and pose the question - all of the shows are available in top notch quality in the box sets. So the point of posting them in shitty bootleg form is......?

The so-named "Destroyers of Civilisation" were no longer the potent force they had been,and were to terminate their mission six months later and go onto lesser,but more lucrative, projects,like the awful Psychic TV,and the even more awful Chris and Cosey.....the exceptions being late period Coil of course.

a) Their "potent force" is still being discovered by fucking rockers like yourself, b) the mission was terminated at its peak, c) PTV was great for two albums ('Dreams Less Sweet' is a masterpiece) until Sleazy left, d) Chris & Cosey are nice people who fucking rule - you doinker - you just hate them because they don't want you ripping them off by giving away their music for free and d) all Coil periods are great. The fact that 40 years later they are even written about by you is proof of their influence. They are still being discovered. Name another group who has created and named a genre of music. P.S. Love your blog - you rule, even if you're an idiot at times, just like the rest of us. Thanks for the entertainment (through pain).

So true... late period Coil is the best.

@Jean-Luc Pointy Dexterous ..because they look and sound better than those poncey remasters.

@Anonymous....Awwww was I nasty to your favourite groops???..but com' on PTV were fucking awful....Yes C&C don't want me sharing their product,but i'm afraid they' can't stop me,..the straight members of the band,as if they had never actually listened to any of their own TG Records.Everyone needs a pension I guess,but don't hold them up as any kind of Icons ffs.
Coil's 'dance music' phase was even worse than PTV!!!
The mission was terminated way past the peak,they had long lost their shock value,so like school children they said they weren't playing anymore...until someone offered them lots of money to reform that is.
But by all means stick with your uncritical hero worship,and i'll stick with being a rocker.
PS You rule too,we need comments like yours...and we're all idiots...we are Humans after all...idiots all.

Most outstanding redistribution of artistic endeavors for the good of the collective comrade.
Forward! The Great Leap Forward.

Actually, here's the solo scoreboard. If you don't agree with the below, well, I'm right and you're wrong. Boo hoo. Sorry 'bout that.

Chris & Cosey were pretty great up until around 1985. Then their finite lack of musical talent caught up with them in a major way.

Coil - nobody into Coil is into them for the music, they're into all the aurrounding doilies. So hey, if you're into nasty drunks and pedos, knock yourself out. Some of us took a pass.

It's a funny old world sometimes. This old man is smiling, anyway.

Yes, I agree with Vin. What that means i dunno?

I find TG difficult these days because I am constantly reminded that Mr Orridge was almost certainly a nasty piece of work.

That's my problem. Not yours. Thanks as ever for the music.

@ Nick, i don't anything about Mr Megson's character,but it don't surprise me. I think i remember a story when he,allegedly. tried to kill Cosey by dropping a concrete slab in her general direction....yep he/she was a cunt....i don't take much convincing do I?.

Jerry Casale usually seems a pretty nasty piece of work. But I still like Devo.

Don Henley strikes me as a SUPREMELY nasty piece of work. Generally speaking, I'm not an Eagles fan, but the early singles still provide me with comforting childhood memories.

And John Martyn....well, we probably all know about all that. But what's better, to name just two examples, than "Sweet Little Mystery" or "Small Hours"? Besides not too fucking much?

I myself have had less than stellar moments in my life. But I know that on the final scorecard, I'll be in pretty good shape.

Moral : we're all just a bunch of meaningless blips in the universe anyway. Taking "stands" doesn't mean shit. Just mind your own little cosmic space, and decorate it with what makes you feel good.

Don't know anything about the eagles, or John Martyn....but i remember an testy encounter between Casale and Andy Partridge (XTC) in a Sounds journalist business lunch interview thing around 1980, where Casale was acting as if he was the most unique thing since sliced bread, and Partridge countered with .."You ain't so fucking special,in England everyone's fucking Devo!" Which was quite true at the time.