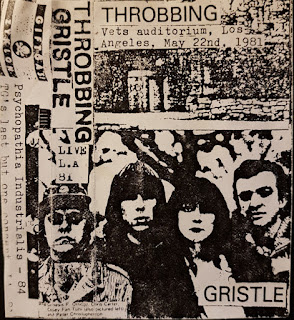 Yer average American's idea of Industrial Music is the rather shit Nine Inch Nails, Ministry,Skinny Puppy, Front Line Assembly.....in other words. Rock music with a prefix...'Industrial Rock' they call it,just a tad of an oxymoron methinks.. They'd turn up at a venue featuring those English faggots Throbbing Gristle expecting Motley Crue and getting something almost intrinsically opposite to rock,except for the fact that it's loud. ........yeah,yeah we know there's more extreme noisey ouitfits out there to fuck yer brane up, and well done for telling us 'cus we know already fanx..The noise loses its effect without the silences,and TG make you wait for the noise.All the best horror films leave out the graphic stuff and leave it up to you what the horror is.TG does this very well indeed,leave the gore to Whitehouse......a group Genesis detested by the way.
Some Americans got it,notably Monte Cazzaza,who was credited with coming up with the genre name.He hales from San Francisco,the scene of TG's final dissolution,and the gig after this penultimate show in Los Angeles.Ah,those poor californians,living in the richest place on the planet had it so hard;but at least they could now slum it and pay to listen to what its like to exist somewhere where suffering is not just waiting for the next shipment of Cocaine from Mexico.I do understand,however, that when one has a long way to fall, it ain't no picnic to climb back up when faced with such wealth flaunted in the starving underclasses face. We all have our own private hell's...what's yours?

Well, I still like Barry Manilow up until around Copacabana. But I don't really consider that hell.

I hate those bands but the Quake soundtrack wasn't too bad by ol' Rent Treznor.
Give me some Ramleh or Sütcliffe Jugend hell even some Head Of David or Godflesh.
I must go on TwatFaceGram and tell everyone about my playlist rotation!
Hell is an endless loop of daytime talk teevee from the good ol' USA, comrade.

I'll tell you who kicks some serious Japanese noise ass is that Third Organ guy. He's got a Bandcamp page now, but I haven't even listened to any of that stuff. His 90s cassettes are the way you do that shit right. No fuckin' around, no pretentious little faffing around bits in the middle. Non stop roar. Sounds like the scenes in Threads after the bombs hit.

Hey JZ. You scoundrel. You crack me up with your fomenting words, just like Trump does, and your classification of an average American's idea of Industrial music would pertain worldwide to everyone who is fucking clueless and was introduced to the term by listening to the aforementioned bands, hence outing themselves to those who know better. Industrial Music begins and ends with TG. But it's cool that it expanded people's conception of music and showed this punk rocker that punk music in comparison was a scam (a great rock-n-roll swindle) like the Archies or Monkees and the derogatory term used back then "that's so rock-n-roll" now applies to the very late coming noise music afficionados who co-opted the term, just like the UK swindle did with American "Punk Rock".

"... the gig after this penultimate show in Los Angeles.Ah,those poor californians, living in the richest place on the planet had it so hard;but at least they could now slum it and pay to listen to what its like to exist somewhere where suffering is not just waiting for the next shipment of Cocaine from Mexico.I do understand,however, that when one has a long way to fall, it ain't no picnic to climb back up when faced with such wealth flaunted in the starving underclasses face. We all have our own private hell's...what's yours?" Mine is contemplating the mass ignorance of Ed Ka-Spel's genius.

You are right ALL Californians are rich, love Trump and anxiously wait for our Mexican Cocaine, FYI - Heroin would be more accurate. Slumming to TG was THE LA/SF fashion in 81 and the Germs (whose drummer Don Bolles recorded this penultimate TG gig) and Flipper were full on mega Rock Stars. So much that shows were $5 and still only 20 people attended. You just seem to want so so much to be a Californian. At least thank Northern California for bringing the best weed to the planet.

Next topic to talk about: the TG/Pink Floyd connection and how the classic rockers fueled TG and the anti-rock movement.

@ the Annoymous one above....I'm glad you agree with everything i fight for and believe in.
Now i'm goin' dancin'.

Hi great post But The Track Isn't In The Zip Folder-5.Principa Disciplina / Forbidden 13:59

Hello, since i have the TG+ Boxset, i will share this version here.According to the infosheet that came with the box, there were two recordings of the show and Chris Carter made a combination of the least distorted bits from those tapes, because they both suffered various degrees of unwelcomed distortion.
The CD ( not cut into tracks like on the bootleg):https://workupload.com/file/83vNP3uzvGQ