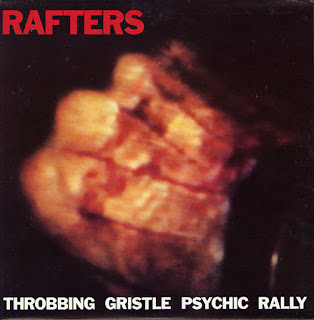 Throbbing Gristle's penultimate performance in The United kingdom of Great Britain and Northern Ireland was in rafters Club in Manchester,at something called 'the Psychic Rally'...wot?
Oh yeah, it opens with a tape of posh nut-job Aliester Crowley blathering on about some shit, sounding for all the world, or underworld, like Winston Fucking Churchill after a few Brandy's. Christ, or should I say 'Anti-Christ', I hate all this Psychic shit....and these people would slag off Christian-Metal when they are doing the exact same thing, but with a different lead actor.
Genesis P. Megson would have loved to have been a cult leader, or better still, would have loved to have been Aliester Crowley. The trappings of being an alternative pop star seemed to trip that switch we all seem to have,when one gains an over inflated view of oneself to the point of self-diefication. Hence the soon to be formed 'Temple Ov Psychick Youth' embarassement, or more accurately, The Psychic TV Fan Club. Bizarrely this is the opposite way that most Cult leaders go about things.Like David Koresh (His surviving children are on record as thinking that your faithful scribe is a complete 'asshole'), who started the Davidian cult first, then tried to be a Pop Star on the back of that.....who's right and who's wrong I dunno...maybe both of them one thinks?
This show is full of all the late-period tension that makes for a good outcome artistically, but disasterous personally.I think they were on to something here....if only they'd have stuck it out, without having an ex-girlfriend ,and her new boyfriend in the group, they could have been as big as Fleetwood Mac.Whoops-a-daisy,I think I just described Psychic TV!?
Tracklisting:
1 Illuminated 666
2 Betrayed
3 Womb Of Corruption
4 Very Friendly
5 Something Come Over Me
6 Playground
7 Auschwitz
8 Devil's Gateway
9 Hastings
10 Discipline
DOWNLOAD how not to start a cult HERE!
Posted by Jonny Zchivago at 08:46

Jandek's been at it again the prolific bastard

The Cult of the Jewish Carpenter is the bestest cult of all.

"if only they'd have stuck it out, without having an ex-girlfriend and her new boyfriend in the group, they could have been as big as Fleetwood Mac"

And have you any discipline you'd like to sell?

Nice comment of Jim Jonestown in the style of GPO friend Brion Gyson ,i suppose?
Here is the remasterd, uncut CD version of this show from he TG + Boxset,recorded with binuaral dummy head microphones.
The CD:https://workupload.com/file/dLHAjaZPuzz