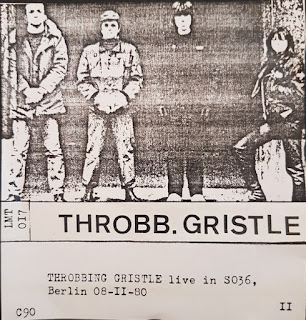 A cheap holiday in other peoples misery, a great chance to pose for photographs at Hitlers Bunker and the Olympic stadium, and get to do a couple of gig's for West Berlin's art poseurs as well. This is what being in a group is all about.
This is the longer and superior second set from the evening after the first set.Again there's a version of greatest hit 'Discipline' tacked on at the end for the kids to dance to,but no encore.....I bet they wanted to really, but it wouldn't fit in with the pose.That's Alternative Pop Stardom for ya.Ja?

Had a drink with Porridge once and what I remember was his favorite tipple was Heineken and he thought Deep Purple were funny.

Listened to the previous Throbber late last night while unpacking downloads and I thought it was great.
I haven't listened to the early releases besides the ones posted here so there is that.
Looking forward to this one. T.Y.

Those 24 Hours cassettes are not 320 kbps as the site states, but rather 168-192 kbps like the ones that were already posted here.

Well spotted Mr P.....they're the same files being sold back to me/us by an unscrupuous blogger.

Hey Johnny, do you really HAVE to sail under under a false flag?
These two Berlin Shows and the one from San Fransisco are clearly NOT from those bootleg cassettes but are taken frpom the Box TG +, which i bought in 2003 and the running times are identical, so the files come from the cds , NOT, as you present them, from cassettes which would be better in line with the general politics of your great blog.Is this the reason to pretend the files are from cassette?

Oh Christ...who cares? The artwork is better thats why they are presented like this...its about music not record collecting.

The artwork is indeed better, but in another comment you wrote that you are postings rips of the cassettes because they sound better, but in these cases you don't give a fuck and are NOT posting rips of the cassettes.This sounds like the inconsistent "argumentation" of a certain ex-orange-haired president,fortunateley i know that you are most of the times writing on a higher level then this!

You're right, I don't give a fuck.
You should get out more.