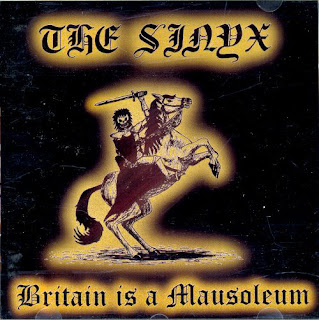 After the kids had read all the Tabloids in 1976/7, some of the less intelligent ones absorbed the standard line and became Yobs with guitars,with an agressive thug on shouty vocals. The ones who were just making up the numbers with nothing special about them whatsoever.
Southend's Sinyx were a great example of this plague upon our shores.
They were around for around six years from 79-85, managed one ep, and an appearance on 'Bullshit Detector 1' ,despite having very little of the Anarcho-Punk about them. The hooligan lead singer evolved into a standard Skinhead, as befittin the sad decent of street punk into the new standarised territiry of 'Oi'.
All their Demo's and  solitary EP, were collected onto one CD released in the USA in 2005...and here it is......so if you like your punk wearing boots,leather jackets with studs on, and made by football hooligans, then this is for you. A nostalgia trip back to when some people carried it all on as if they had never really listened to any actual punk records,but just read about it in The Daily Mirror.
Don't wanna be Sinycal(sic)but....'Punks Not Dead' said the Exploited......yes it fucking was,and stuff like this were the nails in its coffin.

DOWNLOAD this mausoleum to punk rock HERE!
Posted by Jonny Zchivago at 10:50

This stuff is the sound of 'Stupid'. From a small ghetto of booted up identikit so-called 'punx'.the only thing dangerous about this generic rubbish is the yob-ism.

say's you I don't agree I love this stuff

Why you always got to be a cunt about it all Jonny No Love? This was one I had built up to me for a bit before finally grabbing a hold of this here GTA release on CD. It was heralded by none other than the Peni bass player so my imagination grew a bit beyond and I have to say that I was somewhat disappointed in the end. I still like it enough but well you're likely as close as you are far or whatever. Nobody likes to have dream child's mongoloid head bashed in. Anyways I'm a bit surprised as I thought you were a futbol hooligan yourself, no? Also bald or am I thinking of your nuts again? Okay do what you can with that. I'm going to download this anyways and pretend I always had it. Ripped from CD personally. Eat your farts out. Okay that was stupid. Seems about right then honestly. ☻

he get's off on it so don't bother he always right no matter what you say last time i'll leave a comment hear he isn't worth anymore of mine your's time.

goodnight and have a pleasant tomorrow

Ha Ha Haaa!...are you replying to Nihil Yung's comment?......you don't understand the subtle art of Sardonic Irony do you?Thats why you like simplistic humorless dumbass music like this, along with your fellow sad 55 year old Exploited Punks not dead chums.

spoken like a true asshole you think your so much better than everyone your just a sad old CUNT!

Oh very erudite aren't we?
Sweary words.....the last refuge of the inarticulate, ie ,you.
I Thought that was the,quote unquote, "last time you'll leave a comment 'Hear' " (sic)?
You're making a very good case for everyone being 'better' than you, at least.