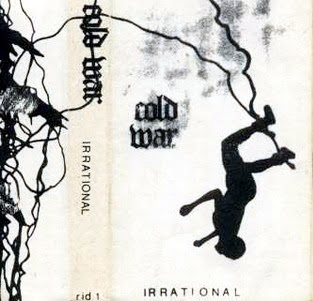 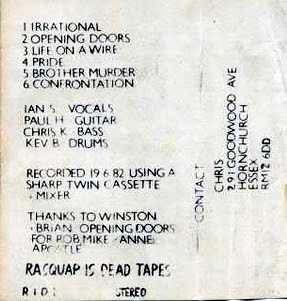 Essex is now known as the home of the fake tan and vacuous vain morons, thanks to the godawful scripted reality TV show 'The Only Way is Essex' or 'Towie' on UK TV.
But remarkably didn't Dr Feelgood come from round there? Eddie and the Hot Rods, Ian Dury, Stripey Zebras, and,as Joey Essex would say, 'Reems' ,of lesser lights, like Cold War.
On this home recorded tape they achieve a watered down Killing Joke brand of Post-Punk,after the Joke were three albums in to a very influential career by '82. The Anarcho-punk stylings of their earlier sound have thankfully disappeared as they try hard to be trendy. Retrospectively its not bad,but Killing Joke it certainly ain't...not even up to the standard of other joke-a-likes 1919 or Red Beat..... 'Reem'!

I think I've got a copy of this somewhere, and another tape with some studio-recorded tracks which may or may not have been released anywhere - as you might recall, Cold War were Namedrop Records artists, briefly. In fact I think their single "The Machinist" was the best seller we put out. At the time indie-label punk records were having a bit of a boom and you could sell 1000 copies of almost anything that fitted that market. But I think if they'd had a bit of luck, or one or two really catchy songs, Cold War could have had more of a career. They might have made the cover of Sounds, at least.

Yeah, they seem to had all the ingredients that appeal to a producers ego. If Rrevor Horne or Martin Rushent heard them, they'd would have had a number one....at least in the alternative charts.....a bit ropey sounding in the raw, but so were Frankie goes to Hollywood and Joy Division.