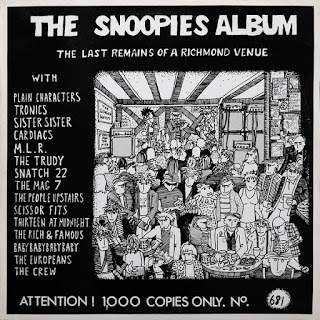 Staying in the London area with,not quite a local bands compilation,but an album of studio recordings of some of the bands who played in very posh Richmond's premier alternative music venue....."Snoopies".Which closed its doors in 1981.
Some cracking tunes on this one, including a 'Hit', with an earlier version of The Cardiacs stadium pop classic "Is This The Life?", which was a minor hit single in 1988!?
There's plenty of classic UK DIY as well, including the Tronics and the legendary Scissor Fits!

DOWNLOAD these remains HERE!
Posted by Jonny Zchivago at 10:32

This looks interesting. Was the venue named after Charlie Brown's dog? I don't care what anyone says Snoopy is fucking rad. What other dog you know that flies around like the Red Baron? All while just chilling on his dog house roof. That is some magical stuff man. Schulz was on a good one when he thunk up that story line bless his soul. Charlie Brown his owner I hate though. He is as boring as electronic house music. Glad we could have this talk Jonny.

Zog did a track called "Its a Charlie Brown Funeral", i'm sure you'll like that one?

The venue may have been in Richmond but not in any way posh. Most of the bands that played there were from Houndslow and Whitton and Feltham. It was a genuine melting pot and if you had ever seen 'The Dirty Toilets', The Pests, and Aunty Puss - you would know what not posh is all about.

Hi - The original Ralph E Boy here. I produced this album 40 years ago this year. I am also incidentally, Lord Puffin as well. As for the name of the club, we inherited it and were not allowed to change it. Whether it has any relevance to our beagle friend I don'n know. What I do know is the whole project took a year of my life and I am still very proud of it. My track was Machine Gun, first up, I am still in contact with many of the artists and amazingly at least one of the bands is still going. What I didn't appreciate at the time was that I was part of the 'DIY' movement which is now getting a lot of interest and kudos - to us at the time, teenagers from West London, it was just what was happening all around us. Delighted that people are still taking an interest and copies still change hands on ebay for up to £60. Regards - Ralph E Boy

Hi Lord Puffin, I’ve got a copy of your Snoopies album #751. It’s a great album! Bought it when it came out. I was 14 when Snoopies closed and just missed out on going (as you could pretty much drink in all the pubs round there by 15!) But have seen a few of the bands, especially the Cardiacs. It is a brilliant slice of history with some top tunes on so you should be proud!

G'Day, Lord Puffin! I also have a copy of the album....#859! Listening to it again after almost 25 years....brilliant stuff! Bought it from a now defunct record shop in Bristol, CT in the U.S. of A.....drove my sister crazy with it. Still loving it!