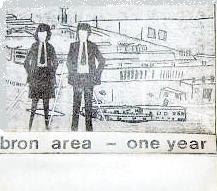 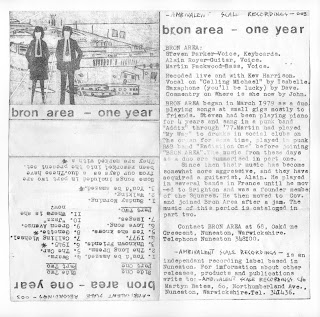 Keeping on a theme of post punk minimal synth duo's, from the seething hotbed of post punk creativity that was....er......Nuneaton, Warwickshire (UK)?....... comes,or came, Bron Area.
A kind of Post Punk version of The Carpenters,but without the tunes, were Steven Parker(Check out his classic electronic Folk tape with Kevin Harrison Here!) and Martin Packwood; augmented by French bloke Alain Royer. I suppose a French Bloke would be at home in Nuneaton, because that's the kind of small anonymous town that makes up the majority of France. A pointless place stuck on the borderline between east and west midlands, where the slovenly 'Brummie' meets the East Midlands accent(as now made famous by East Mids own  Sleaford Mods,probably the only band left on the planet worth listening to?). I do remember scoring a Hat-Trick in a football match against Nuneaton Borough; the third goal I compleatly sliced on the six yard line and it went in off the post; that is kind of what Bron area was for the music scene.....an accidental hit,viewed with greater fondness the further back in time they drifted. Of course I now remember this hat-trick goal with a slight tear in the eye (mainly because i doubt i can even run these days,never mind score a bloody goal!), and Bron Area has that same taste.Music of such naiveté and charming innocence is no longer  possible in this over-informed shit-hole that is modern life.
Unfortunately,they quickly lost their innocence,and started to sound....oh christ!..... "sophisticated",and .....i hate this word too...."Experimental". Experiment as much as you want, you will never attain the sonic heights of accidentally creating something randomly weird purely because you don't know any better.
Their peon to the golden year of 1977, the year Punk Broke for us provincial types, is utterly charming but there contains a small moment of truth within the primary school poetry....."We all cried, the night the energy died, that was 1977"......of course the energy didn't die in 1977,perhaps a few years later in 1983, but i suppose the rot had set in as the leaders sold out,but that was when us provincial kids started ....ahhh shit......"Experimenting"!?
This cassette captured that moment of transition, before Bron Area got "Experimental" and started to sound like "Sophisticated" fellow Nuneaton synth duo, Eyeless In Gaza......or was it vice versa(Not the Band)?

This is great; i'd forgotten how great. Managed to get rid of lots of tapes like this, Kevin Harrison, early Attrition, and Peter Becker solo, so good to be able to listen again. Mind you, I do like the Bron Area LP, even if it is a bit MOR in places. Many thanks. rupert

FYI:
Bron Area started life as a duo in March 1979, emerging from a community of musicians in Nuneaton, England. Martin Packwood and Steven Parker had been involved in a number of projects before meeting Peter Becker, who supported and encouraged them in the early stages of Bron Area. With the reorganization of Reluctant Stereotypes, which resulted in the departure of Martyn Bates and Chris Dunne (who would drum on all later Bron Area records), Bates arrived at a Bron Area gig to be introduced to Becker, and thus Eyeless in Gaza came into being. (from Forced Exposure website)

Your blog is brilliant! Thank you for everything!