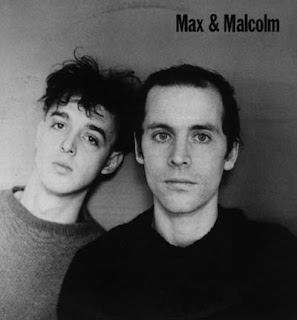 Yeah,that's all great, but what happened to the members of Metabolist ?
No-one really knows, except for this solitary Cold Wave tinged minimal electronic LP from 1982,featuring Malcolm Lane,main protagonist of said post-prog starlets.
Who's this 'Max' geezer then?
Pseudonymously labeled 'Max Headroom' he bears an unfortunate resemblance to 'Twat of the year 2005', Pete Doherty(If you don't know who he was, don't find out!),or maybe even Twat of the Seventies and beyond, Sir Paul MaCartney. Other than that there seems to be no consequent trace of Mr Headroom; unlike messers Doherty and MaCartney.
That's how we like it way down here; do what needs to be done then fuck Off back under your rock.Again,unlike Messers Doherty and MaCartney!
Malcolm did some other obscure stuff,but i'm damned if I can remember what they were!?
This venture into the murky world of guitar and drum ethnically  enhanced minimal electronica is really very good indeed.
It maintains the darkness of Metabolist's studio work,but stripped down even further to the bare bones,enhancing the misery and loneliness a notch.Music for anonymous urban bedsit dwelling.

Why Do Tigers Wander Thru My Mind?
Palest Of Places
Their Ghosts Do Shimmer
Inside
High Adventure
Into Space
Lost People
Warning
Wild Beast

DOWNLOAD to the max HERE!
Posted by Jonny Zchivago at 09:58

Thanks a THOUSAND times for this!!!!

I had this one cassette way back in the 80's, never realized it was the guys from Metabolist (and you know how much I love Metabolist)...

Been looking for this for ever, somehow I always thought it was by Chris & Cosey......

Its far too good for Chris and Cosey!
Glad to have brought happiness into your world.
Some record company man messaged me on facebook looking for Malcolm,of max and Malcolm fame...because they want to re-release all of Metabolists works.
I found a later member of the band living forty kilometres away from me...Malcolm is still elluding us so far. I was a friend of his on 'My Space', but y'know what happened to that. He did express a liking for 'Scouts Of Uzbekistan' however....a man of impeccable taste.

Loved them. Saw them with Lemon Kittens in Acklam Hall in 1980 and organized a poorly attending gig for them at Sussex University where I was then ‘studying’. Then Sort of lost touch, until Malcolm played on my group (Pump)’s Decoration of the Duma album in 1987. Then lost touch again.

i would like to know which member of metabolist live a few kilometres away? malcolm lane

Greetings Malcolm,
i can't remember, but i think he was a percussionist, living in Pezenas in France. They had an article in a local rag about this group is was in a few years ago and he said he was in Metabolist? Any Ideas?