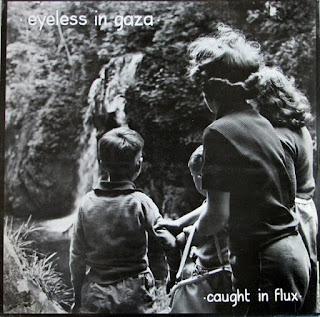 I didn't rush out in my school lunch break and buy Eyeless in Gaza'a second album of 1981,unlike I did with the first album.
There was far too much going on musically back then,and they had started to repeat themselves as early as 1980,then continued to do so.This album is a testament to that.
Basically its 'Photographs as Memories' 2, but without the hits.
However, listening to it now , compared to the incredibly terrible pop the kids listen to today this is Mozart. Full of the intelligence, energy and passion that the millennial generation seems to have none of......even when they're playing on their X-Box or Playstation. Obsessed by trivia in an insular world of 'Tech', and disposable triple albums for twerking about breaking up with boyfriends.
Such was the small demand for Eyeless In Gaza products, Cherry Red included a free 12" EP.But things moved fast in those days and they got lost in the milieu......funny how time seems to have slowed down, or is it because our own personal perceptions have sped up?...but art in general seems to have become stuck.
Musically 'Grime' is spoken of as the latest thing, but wasn't that around at the turn of the millenium(?), Dizzy Rascal and all that? That's not excluding the fact that its really just 'Hip-Hop',(which has been around since Eyeless In Gaza's Caught In Flux!) with a silly name featuring 40 year old rappers talking in that very silly accent where 'Th' become 'Phfff' ......I Phffink,Phffank God, therephorr I yam.....Nah,I don't Phffink so mate!
Someone was going on about how 'Rap' began in Africa last week.....frankly who gives a flying fuck where it was invented,the sad thing is that it can't be uninvented in Africa!......dunno how I got here but, it was fun.

The Eyes Of Beautiful Losers

DOWNLOAD in flux HERE!
Posted by Jonny Zchivago at 13:34

I can't imagine all these Eyeless in Gaza posts have anything to do with current events. Seem apropos to me anyway. I was a big fan of these guys back in the day. Thanks for keeping them in circulation.