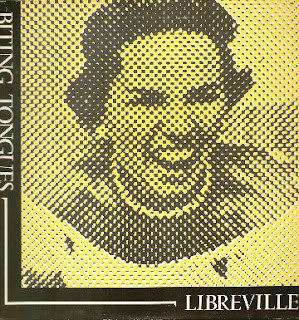 More excellent experimental post punk with a smell of avant jazz mixed in for comfort.
Yes this Mancunian combo really did include future 808 state and Danny and the Dressmakers legend Graham Massey; who, coincidentally, I heard had recently received an Honorary doctorate from some dodgy university in Lancashire? This is a man who once co-wrote a song called 'Com'on Baby Light My Shite'!?

DOWNLOAD from libreville HERE!
Posted by Jonny Zchivago at 10:49

Question, are rips like this yours? Or ones you've sourced from elsewhere? I have a very specific reason for asking and would like the specific answer. I will explain in detail once you respond...probably give you even more reason to get in trouble at the pub. :)

Ah...Mutant was a great blog in its day. Grabbed a bunch of low res stuff from there myself, years ago. My reason for asking is that I believe all new rips (vinyl or tape) should be done in 24 bit/96 kHz to maintain the best sound quality possible, then offered as flac format in that quality. CD rips, the best that can be hoped for is 16 bit red book standard. The Pink Military rips I recently gave you links for (for example) were ripped and cleaned years ago, buy a gent I happened to run across on the web, but that was in a day and age when red book standard was the best that could be done (sound cards hadn't advanced far enough then).

New rips, I believe, should be done/offered in such format so as to preserve the best quality as possible going into the future, in enough peoples hands so as to be preserved for posterity, as it is my belief that western society is quickly going the way of Rome in its final days...soon to be pages in a book of history, rather than a reality. Much of Europe will be part of a caliphate, though Russia will likely survive, along with parts of eastern Europe, as the rest of it commits cultural suicide. The US will fragment into multiple principalities, and the financial and leadership roles of the world will pass to the far east, with China taking the west's place as the major hub of world hegemony.

I say this, not because I wish it to happen, but because my study of history points to this happening.

I want to try to preserve as much of this music as I can help preserve, through that transition.

And with all that doom and gloom now said, not sure if you're a Pink Dots fan, but I have a rip I personally made of this: https://www.discogs.com/The-Legendary-Pink-Dots-Kleine-Krieg/release/591240 , ripped in 24/96 from my Sanyo tape deck via RCA jack to the I/O box of my Sound Blaster X-Fi Fatality card, then cleaned of all tape hiss and no musical loss, via a filter I created for Sound Forge.

Your view on the fate of the western world is somewhat optimistic to mine; but I can't disagree.......in brief.

I have made a 320k rip of my own copy of Libreville now,so I'll upgrade the mutant sounds one later.
I agree with saving this stuff for posterity,but it needs to be saved on something physical and low tech to survive the oncoming mass extinction.....but then again who would care? Our inheritors wouldn't understand the attraction of a High Res physical copy of Danny and the Dressmakers 4 and a half hour rock opera "200 Cancellations".Its the survival of the fittest out there,if we lose just leave a fossil,and no clues as to who we were....scorched earth policy......maybe send it all into outer space, and it can return Like 'Star Trek the Movie' to find its maker, destroying all in its path......hey, there's a film in there somewhere?

The trouble with offering FLAC etc is that it uses up all my free space on my storage space sites. I ain't intending on paying any of these companies a thin dime unless i have to....already have to pay Google $2.50 a month for 100 Gigs storage.

I usually slag off the LPD's.....but I admire their DIY credentials, and have already posted a Kleine Kreig rip a few years ago.......an upgrade would be very welcome.......you managed to clean up all the hiss with no musical loss...at all?.....are you sure?

the NR'd one is fine sir.

I especially love the opening track of this album - highly recommended.

I look forward to your even better rip sometime.

Its very good stuff, that hasn't dated at all.

It goes against my principles, but I've done a FLAC version....so i may as well upload that for you?....unless you want the 320k mp3 version....I would.

Links to the Dots sent...both NR'd and not NR'd...up to you if you want to make the comparison.

And yes...flac, flac, flac!!! Make the links only available for a limited period after posting, as ESWA used to. A Mega acct can go a long way that way, without spending a dime.

Forgot to mention...never got around to track splitting on these, so it's just 2 flacs per DL...Side A & Side B.

The direction Gang of Four SHOULD have gone in