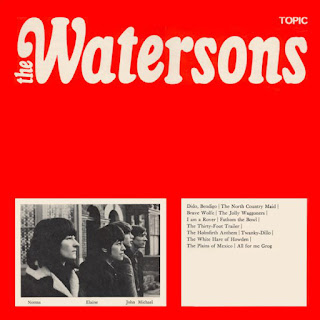 1966, a fine year indeed, England won the world cup with a dodgy goal that pissed the Krauts off double LOL!,and The Watersons released their second album on Topic.
No selling out for The Waterson family,still banging out the ,largely,unaccompanied traditional songs mostly from East Yorkshire and the lovely city of Hull,with a swarthy gypsy's religious Zeal.No Aryans allowed here thanks.
Their enviable,it says on the sleeve-notes, combination of dark good looks, ringing voices, abundant charm and immense vitality earned them a kind of star status within the UK folk song revival which was usually reserved for them silly pop singers. With unpretentious zestfulness for their craft they had little or no interest in the glamorous sewer of showbiz,and doubtless, showbiz had little interest in them? Unless they changed them into The Hollies or some 60's dross like that,and send the ladies to Mary Quant for a vast makeover.They luckily escaped this humiliation,unlike some of their fellow travellers,such as Sandy Denny who was made to go and get glammed up for David Bailey to take some of his shite photo's of her for that big push for stardom....which of course went very tits up indeed!

Absolutely essential! I first saw The Watersons in 1975 and have been to see them in their various configurations ever since, always a pleasure. Norma's voice always raises the hairs on the back of my neck, but Lal's is something/somewhere else... Thanks, Milly's Grandad.

I am loving all this UK Folk,
Thank You James,