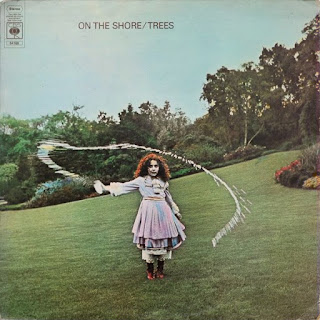 Following on from Forest, the group, not the crap footy team, comes another contender for the fourth best Folk-Rock group in the UK and Ireland.
So what makes up a Forest?.....yeah,very good,...Trees.
They were on CBS , got the sleeve designed by Hipgnosis, and sold about twenty two copies of their debut album,and even less, probably 17 of this follow up. It has a very recognisable cover photo,and i hear there's a new pressing on coloured vinyl that i may purchase to leave out on my coffee table for my regular fine wine and cheese fondue soirées. That should cement my place in the bourgeoisie as a newly qualified permanent resident of France under the Brexit agreement......they took my fingerprints the fookers! I get a plastic card with my face and biometric data on it,which leaves an empty feeling after four years of being used as a negotiating chip by both the European Union and dear old blighty........Kuntz!....There was a German footballer called Kuntz i seem to recall.He was a Cunt too.
Its all fine stuff,but some of the acid guitar playing does irk somewhat.It's that fizzy transistor distortion,of which there was rather too much of, that spoils the overall sound a tad.Great for The Gang Of Four, but for progressive Folk....Nah!
There's,naturally, a lovely lady sharing the singing duties again, the recently deceased, Celia Humphris.This one can actually sing to boot.....Mmmmm nice. Apparently Cecilia lived in France too,probably next door to me.....i'm that sociable that i would never know.Hopefully she not stressed out by our bastard politician chums in her last days?...cunts!
So to make up for all this bureaucratic fascism i've only gone and  knocked up an expanded edition of the Tree's second and best album "On The Shore",padded out with peel sessions,demo's, and unreleased third album demo's too!?
Tracklist:

DOWNLOAD if you're really shore HERE!
Posted by Jonny Zchivago at 10:31

Capital Records, the home of DIY?

ps...i think you'll find that the unreleased third album and the BBC sessions were not released on CBS.

Thanks a lot for this gem, Mr Z. Reminds me on the "Blows against the empire" album by Kantner and Slick. Definitly more enjoyable than naughty noise in high price boxes. How about early 70s live bootlegs by 10cc? Isn´t it funny how things become provocative that were not meant to be so and vice versa?

Interesting point you make Herr A.....10Cc live boots?Hmmmm....that should provoke a response.....ahh, high price boxes is mentioned...you didn't come here via the link on the VOD facebook page did you?...the fuhrer of said Elitest enterprise was trying his level best at seeming above it all...as usual.....he's not very good at sarcasm is he?