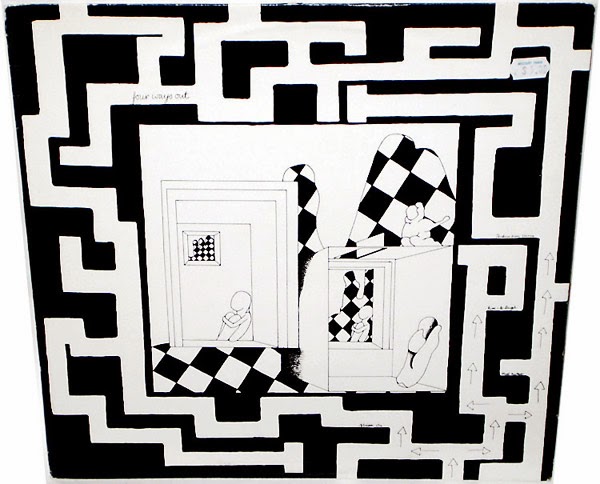 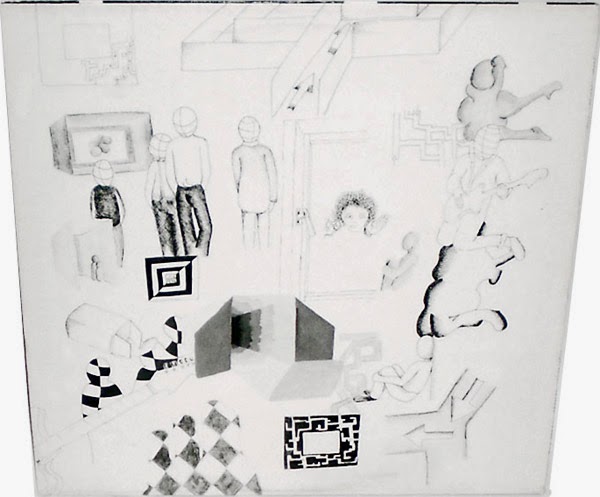 Picasso strove to paint with the innocence of a child.
Rire: To Laugh, achieved the equivalent for music  effortlessly with their two tracks, then disappeared; never to be heard of again. Such perfection cannot be repeated;to do so would harm this perfection, so the only road left is to retire.
Vision On, a name taken from a popular BBC programme for Deaf kids, never quiet achieve the heights (or lows) of Rire:To Laugh, but they do have a rather pleasant Joe Meek sounding organ,which is always something to admire methinks.
The Mudhutters could well have been real musicians trying to hide their ability;as was the trend of the day.They did have a Diagram Brother in their line-up,one Andy Diagram.....a proper musician if ever there was one. A Proto-Ron Johnson Records sound is evident here,and a noble comparison that is by any standards?
Talking about 'Real' musicians, we have Dislocation dance to finish off this shared LP.
Still active today, and partly responsible around 1979 for the White boy Punky Funk avalanche of the early eighties. Also a favourite of the hipster kids of the early 21st century in the trendier parts of Brooklyn.They also, had Andy Diagram in their line-up...what a busy chap he was,still is?

Rire: To Laugh were loosely associated with A Certain Ratio. Their sound does resemble very early ACR. They also contributed two tracks to the Northern Lights (Vol 1) tape produced by Simon Topping of ACR.

I can re-up if you need to hear this.

Hello, never visited your blog before(shame on me!), just downloadin the Metal Box vinyl Rip in FLAC. Rather marvellous; and SLAB!'s complete works.I only had 'Iron Lung',never knew they released anything else.
Oh Yes.....you could reup the rire:to Laugh stuff if you can be bothered.Intrigued to hear this cassette.
Many thanks in advance.
Jonny Z

The link is back up in the comments on that post.

You are a great man.
Much Thanks on behalf of everyone.

Rire to laugh were Martin Henin, Pete Griffin and Mike Pearson and they hailed from Timperley in Greater Manchester. Saw them several times and they even did a gig with both disgraced TV weatherman Fred Talbot and Duran Duran!

Timperley, not only the home of the late great Frank Sidebottom, but also Rire:To Laugh!!!?? what a place!