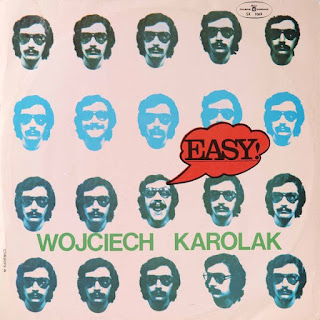 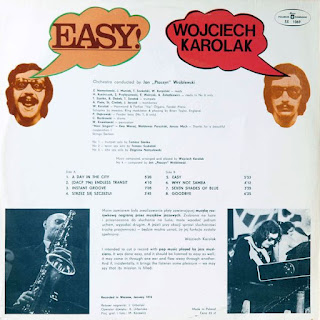 Cold war Polish Jazz on the Polish state-label with  jovial pop-art cover that sounds like the background music for"Bullitt" or "The French Connection". Anyone would think that they didn't want to be there?
Poland looked so much fun from this side of the Berlin Wall after all?
There were a few Polish Prog bands that were half decent , but 'twas Jazz that echoed through the scorched earth ruins of  post war Warsaw most.
Wojciech Karolak tinkles the ivories on this groovy soundtrack album desperately searching for a cop movie to be associated with.....but they didn't make funky cop movies in the communist bloc.Firstly there wasn't anything worth stealing,any criminals were either pre-emptively shot, poisoned or imprisoned without trial,and the state police all had the charisma of a cabbage....which would make for a very boring cop movie.One of the only countries,where the burglars break into museums or banks to put stuff back.
And,to end,a fun fact? Just in case you didn't know , the Ring modulator & phasing were done by one Brian Taylor of England...whatever he was doing in Cold Cold war Poland we may never know.
Tracklist:
1.A Day In The City 5:20
2.(DACP 796) Endless Transit 4:10
3.Instant Groove 7:05
4.Strzeż Się Szczeżui 3:45
5.Easy 5:53
6.Why Not Samba 4:12
7.Seven Shades Of Blue 3:55
8.Goodbye 6:25
DOWNLOAD easily HERE!
Posted by Jonny Zchivago at 16:05

Here's a funny story about Poland...

Dutch band Shocking Blue were one of the very few Western bands to perform in Poland during the cold war years and they haven't forgotten. Still very much loved there so I'm told, loads and loads of Shocking Blue albums have been bought up by Polish record hunters and for that reason some of their albums can be very expensive in Holland these days. Besides that, they were a pretty good band :)

I think I remember seeing Shocking blue on uk TV...may have even been Top Of The Pops.
Thanks for the tip,next time i see a Shocking Blue record in the boot sales I'll nab it and try and flog it to a polack of a certain age.
I did buy a Golden Earring album the other week for 2 euro's....a very dodgy gatefold pic inside with a view of the reverse side of a blokes ball bag....we accepted this in England as the kind of thing the Dutch would do so its ok...we think you're all sex mad pervs on drugs over there.....which from my experience is true.
My other Dutch Rock experience was Focus on the Old Grey Whistle Test playing a medley of their two hits....as an 8 year old i was impressed one has to say. https://youtu.be/TV-X-5CcfYY

The other one... Focus... You're taking me back, that's the stuff my mom was blasting all day long, along with great Dutch prog-rockers Ekseption and yes, Shocking Blue with the very sexy looking Mariska Veres en those more poppy but great prog-rockers Earth & Fire with the absolutely uber sexy Jerney Kaagman (who is now living in some care home for old artists wasting away with alzheimer disease, the waste!!!! the waste!!!!!)...

And if she wasn't playing those bands it was the pirate radio stations Radio Noordzee and Veronica, operating from their boats in the North Sea...

Golden Earring was a whole different thing though, also a great band, saw them at the Cannabis Cup in Amsterdam, must've been '94, me and the crew I was working with, the Roots, won the second prize with our White Widow, their singer, Barry Hay lives in one of the Dutch ABC islands, Aruba, Curacao and Bonaire, bit of a miracle he's still around after the truckloads of coke he consumed over the years...

So many great Dutch bands in the 60's and 70's, Q65, Brainbox, Livin' Blues, Cuby & The Blizzards, Supersister, not to mention all the great Dutch Indo bands back then...

As always, thank you for the tunes & info being posted.

More Dutch stuff here if you're so inclined:

Gruppo Sportivo was a fantastic band, seen them a bunch of times back in the early 80's, when they first came out it was right when the first punk wave came out and they were loved by a huge part of that (Dutch) crowd, still have all their albums plus that solo album from their front man Hans Vanderburg :)