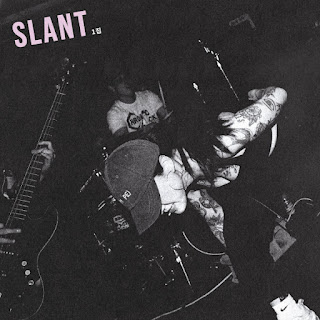 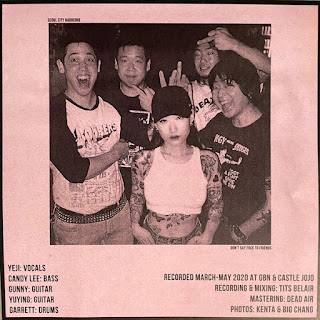 Unbelievably I found a North Korean Punk band!?....well...er....no, not really. Just looking at the picture of young people just having fun would be crime enough for them to have been executed by artillery fire in the Peoples Democratic Republic on the wrong side of the Demilitarized Zone where 'Fun' is strictly Illegal and enforced.
No,Slant are certainly NOT North Korean,nor are they a Korean Slint tribute band....although 'Slant' the 'Slint' Tribute band should really exist somewhere? They are ,however, from the Korean peninsula,on the right side of the Demilitarized Zone.south of the 38th parallel.
They play american style 21st century Hardcore Punk very efficiently, with a rather attractive be-tattooed young lady screaming some lyrics about how crap it is in the north (bit like it is in England)and loud enough to detach a couple of her Tattoo's.
Rumour has it that Kim Jong-Un has taken a shine to the young lady singer Keji,and is considering having her kidnapped and forced to consummate a marriage with one of his belly's. Should she not comply, the same fate that befell the charming singer of his father's best favourite band,Pochonbo Electronic Ensemble,Yun Hye-yong,would apply to her. Which is to be the only person to be executed while still in a coma from a desperate escape attempt.
Of course ,Kim Jong-Un hasn't really got his beady little roving eye on young Keji at all...I'm making it up in the tradition of all great Dictators everywhere.Taken to new heights recently by Phil Collins impressionist and short arse,Vladimir Putin,who also isn't too shy about shagging about either.
Tracklist:
A1 Enemy
A2 Terminal
A3 How Did It Feel?
A4 Stagnation
A5 Travesty
B1 Prison
B2 Effigy
B3 Violent Minds
B4 Modern Addictions
B5 Casualty
DOWNLOAD this potential death sentence HERE!
Posted by Jonny Zchivago at 15:37

Somehow, when I'm being given the finger, I know I'm in good company. Don't want to be anywhere that it's not acceptable.

lucklily there's no need for a slint tribute band...they've already formed one which they use to whore themselves on countless nostalgia 'shows'. you can even buy a slint beach towel.

And here is something approaching that Holy Grail find of some North Korean Punk.