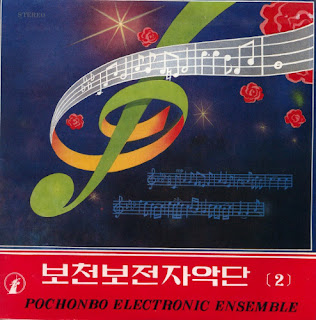 Having,unsurprisingly, failed to locate any North Korean Punk Rock,although some Hoaxer pretended to be Kims favourite Punk Rocker for a prank, there are zero punks and, of course,zero Gays in the PDRK.I did however, find a copy of this on Archive.org, The workers official pop orchestra, who sounds not too dissimilar to some unfinished electronic work found in a box at Joe Meeks flat/studio. Please humour me as to the factual accuracy of the info on these recordings which is a tad sketchy at best....and there are about 150 volumes of this stuff out there
Singer Yun Hye-yong was a woman beyond the reach even of North Korean dictator Kim Jong-il. Yun, the lead singer of Kim’s favorite band The Pochonbo Electronic Ensemble, was apparently brutally executed after she spurned Kim’s persistent advances and copped off with another bloke....The Pianist..When Kim's agents discovered their relationship by tapping her phone, Yun jumped from the roof of Mokran House, an official banquet hall, with her lover. Although the man died instantly, Kim ordered his men to kill Yun after resuscitating her by any means. She was eventually executed at the end of 2003, while still in coma.Another new low for humanity.
The disturbing  paragraph above is probably a bit light on facts, but somehow I think it probably isn't.The source being a dodgy defector with a book to promote. Tragic for Yun Hye-Yong,but entertaining for us freedom luvin' bastards in the Free world.....unless I've got that upside down as well?
The love of this musical group is absolutely mandatory in the Democratic Peoples Republic of (North) Korea,a bit like ABBA is here,so given the choice between watching or listening to this utter drek or execution, this ain't half bad .
It has that creepy state controlled vibe only equaled by the BBC's test card music of the 1960's1970's when Britain was virtually a communist state too....except with,debatably  'better' music. Although like in the DPRK, homosexuality was still illegal in Britain up to 1967;it just wasn't a capital offence anymore. It sometimes seems that but for the roll of a dice there go we (sounds like a rival Korean Dictator don't it?).Maybe this was the true subject matter of track 3 "Dear Brother is Arrested".........that can't be real can it???....or,to be really trendy, gender politics on track 8, "When I Bloom as a Girl".In fact the running order could have easily been mistaken for an album by The Clash.
It wouldn't surprise me if the powers that be in North Korea played this relaxing,but sinister, elevator muzak at mass execution rallies to wild applause.
Being the ultimate Nanny state,and a very stern Nanny at that, DIY is strictly frowned upon,so,like in the former Soviet Union,you aren't allowed to make and play your own music unless you can prove yourself qualified.....called,laughably,'Professional' status in the CCCP. Then you would be restricted to traditional Folk,classical or play in a weird muzak orchestra like the Pochonbo Electronic Ensemble.You could defect to the BBC if you don't mind being shot at I suppose.
So the phrase "Die or DIY?" is a deadly reality in the DPRK, so don't get any fancy ideas of you're North Korean.....not that they have access to the internet to be 'inspired' by the drivel I write,so they're safe....unlike you lot!
Tracklist:
1. Jong Il Peak, Shine
2. Tondollari
3. Dear Brother Is Arrested
4. Farm's Young People
5. I Will Remain in the Motherland
6. The Village We Live
7. Song of Blessing
8. When I Bloom as a Girl
9. The Youth of the New Day
10. Spreading the Seed of Revolution
11. Young Engine Driver
12. Red Followers on the Beach of the South Sea
DOWNLOAD like one of Kim Jong-Un's latest missiles HERE!
Posted by Jonny Zchivago at 08:14

I read a book by a N. Korean defector, a few years ago now, in which he described the state's favoured ways of dispatching non-persons. Memory's a little hazy now (damn you, decrepitude!) so i may be confusing tales of execution, but i think she was either blown apart by artillery (although this seems the more likely fate of a general who fell out of favour) or machine-gunned in front of her family. Either way, it's a hell of a bad review.

I'm horrified.She seemed like a nice lady.
I'll never listen to this record in the same way......in fact I've only heard it once....not all the way through either,and will probably never listen to it ever again,even before learning of her probable fate.
Don't cha just dislike Dictators a lot?

Richie, i've done a serch and your factual vagueness has been confirmed as near facts here:
www.pyongyangtrafficgirls.com/t148-the-torrid-romantic-life-of-kim-jong-il

Nice one Jonny. Yep, it ain't exactly a barrel of laffs in the DPRK is it? Makes you wonder what goes through the minds of people like Dennis Rodman (again, memory might be playing tricks on ol' Muster here; whatever his name, it's that dumb plank of an ex-basketball 'star') when they start spouting their pro-Wrong-Un bullshit.
This, i'm afraid, is one download i think i'll pass on, but in all other respects keep up the good work mate.

And who can we thank for supporting the human rights funhouse that is the DPRK? That other bastion of human rights integrity, the People's Republic of China! The DPRK is 100% reliant upon Xi Jinping and his country of tolerance for their very existence.

Of course, who's helped fund this marvelous coalition--us! We in the U.S. have happily transferred our manufacturing wealth to the PRC for over 75 years now. Plus we get bonus points for being in wild financial debt to the PRC on top of it, as they hold the lion's share of our foreign debt.

Brrr, this whole thing gives me the shakes, the music, the history, what happened to the people. Yeah, every time you think humanity has hit its lowest depravity, damned it it doesn't find a way to outdo itself.

Ian....and its gonna get worse. However, the shrinking chinese population is as dependant on us western dumbasses buying this crap,as we are on chinese slave labour,and borrowing requirements to sustain this pointless plastic luxury habit. Manufacturing is an outdated concept. Soon to be robotised.

rev....as much as i don't try to see the good in things, stories like this one, makes me feel justified in my misanthropy.

@Richie Muster Do you happen to remember the book's title?