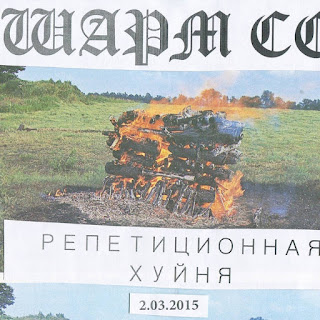 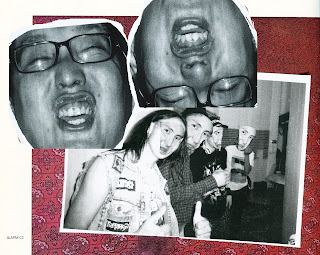 They describe themselves as Stupid Punks from Yakutsk, which is in Siberia,about 500 kms from the Mongolian border,and comfortably an ever shrinking eight and a half thousand kilometers from the bastards in Moscow.
It seems that 2015 was the year that punk broke for this isolated community. Free from the sophisticated western aware boredom of the distant capital,this frozen wasteland has to make its own entertainment, with its own brutal style of punk rock untainted by the seen it all heard it all sophisticated urbanites of the western sphere of influence.
Here Bevis and Butthead hold more respect than boasting of how many times you had to play Trout Mask Replica before you..."Got It!".
If you've ever been beaten up by a musclebound grunting imbecile wearing a united Russia T-shirt,this is what it would sound like.
Every last one of these very oriental looking inhabitants are seen as Russian, especially when it comes to signing them up for a one way ticket to the Donbas.Except, it seems like its the ones who are slightly less Russian (not white) who get the privilege of being first in the queue.
The man who puts the 'Cunt' in Country,mad Vlad, would deny this western propaganda of course;but if he heard these Siberian Russians expressing their disillusionment,they would be ordered into the cattle trucks at gunpoint,to be taken to the non-existent 'Training' they won't receive before they take a bullet for the Motherland (putin).
Again, I wish the members of Wapm SS luck in avoiding the mobilization,and make for the welcoming arms of Mongolia as quickly as possible....and take your instruments with you.
Anyway, the Charm SS are rather...er...charming.....and brutally good.
Tracklist:

Sending this band on tour in Ukrainia would probably scare people more than adding unfortunate band members to the russian army: https://www.youtube.com/watch?v=3AVGJ0BQ3qo

But being an incompetent moron Putin won't get that.

Ha Ha....brilliant stuff!..I especially like the bit where the singer simulates gay sex with an audience member.....that alone would frighten Putin into slaughtering anyone male.
And yes...that poisonous dwarf is the incompetent moron of incompetent morons. I hear now the prick..like hitler, has taken control of military tactics..issuing orders that will lead to his arrest.....Cunt.

Ps a good name for their fictional tour would be "Tour Of Duty"?

I dunno, they might do pretty well in Ukraine. They can tour my neighborhood whenever they'd like. Glad they're provincial enough to be under the radar and outta sight and mind of the 'authorities' a thousand plus kilometers away.

I only recently learned of Siberian punk band Grazhdanskaya Oborona. All of their albums are available for free here (as well as Egor Letov's later music):

Everything (including war in Ukraine) is going according to plan!

Hi Jonny Could you add my blog to your Blogroll? Thanks in advance.