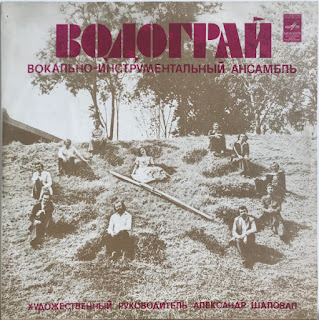 Its a shame that we are going to be deprived of the Russian entry in the next Eurovision Song Contest. Held in the lively Ukrainian town of...Liverpool(?) substituting Kiev, for obvious reasons? However we will have another fine Ukrainian entry to make us all wonder if we're on the wrong side in this increasingly pointless war....er...i mean, Special Military Operation. The horrible winning entry earlier this year, was from.....you guessed it....Ukraine! An awful amalgam of Eastern European sub-hip hop with clothes resembling a car crash between The Black Eyed Peas and Teletubbies' Fuzzy Felt chic...with added Rapping...or raping if you're a Russian 'soldier'.
It got the sympathy vote of course, and cost the UK their first Euro-win since all the former Soviet republics were admitted in 1991.
So to compensate here's another Soviet Ukrainian attempt at cold war entertainment from groovy commie combo ,Vodograi.
This type of break-beat laden cheesy listening got me through the nineties (hard times musically),allowing a humanitarian corridor through all that 'orrible house crap leading to many a chill-out oasis in the depressing clubs and repurposed discotheques of local clubland.
The singing may empty an already empty room of all it's sub-atomic particles, but these cheesy grooves could even get a legless Russian Special Military Operation veteran dancing till his stumps bleed. Spelling out "Thanks Mr Putin" in his blood while swaying Ironically to the heartfelt and jawdroppingly unironic ballad called "For The Motherland".Ahh, the unbridled joys of Nationalism.
Tracklist:
1 Запроси До Танцю = Invite Me To Dance
2 Незване Моє Кохання = My Unexpected Beloved
3 Дiвчина Мила = Darling Girl
4 Путешествие = Journey
5 Несла Дiвчина Воду = Once A Girl Was Carrying Water
6 Тебе Назло = Just To Spite You
8 Вишневый Рассвет = Cherry-red Daw
9 Воспоминание = Memory
10 Родине = For Motherland
11 Голубой Вагон (Музыкальная Шутка) = Blue Car (Musical Joke)
DOWNLOAD from a motherless motherland HERE!
Posted by Jonny Zchivago at 10:08