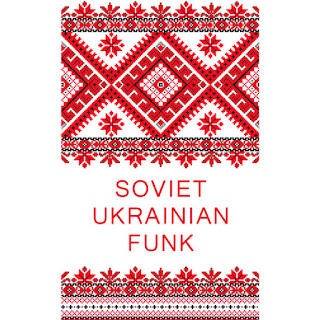 Steaming Hot Cold War Caucasian Jazzy funk from the Caucasus Back from the days before every Ukrainian band was a metal act,and Vladimir Putin was a joyless Stasi clerk Twat in Dresden. They were secretly Funky Mo-fo's;but,Funky as in Elevator's,libraries, and shopping centres, but nonetheless Funky.
Rather than try to work out whether these hieroglyphically named Soviet era musicians were actually Unkrainian and not Russian, or more commonly when it comes to music, Estonian.Here is a handy mixtape that has done the hard work for us,concentrating solely on our Ukrainian chums,gettin' the groove on, albeit in a TV cop-show library music kind of way,from the 70's and 80's.
Just to make it even more amusing for us Anglo-Saxon types, I have translated the Ukrainian tracklist into Chinese restaurant English,giving us such titles as "Let me, father, at the wedding","Oh, I will throw a beech on the pit", and the probably illegal in CCCP..."You Smiled?".
The Vladikavkaz peoples ministry of democratic Funk released a statement back in 1975 forwarded to the British gutter press:
"You Anglo-Saxon Western Pigdogs think you have a monopoly on 'The Funk'don't you with your arrogance? Well,we morose Eastern fuckers have got the funky rhythms too,bigger and better funky sheet than your capitalist freedoms could ever hope to equal.You have this James Brown agent, we have Nazariy Yaremchuk, you have zis secret Bootsy Collins weapon, we have Tatyana Kochergina, and Nile Rogers is no Yuri Bogatykov by any stretch of your western propganda's imagination.Directly as we speak,the Sofiya Rotaru Ensemble have been super-glued to a nuclear missile and sent to our Moon to perform a seriously funky version of her 'Hero of the Democratic Socialist Peoples Republic' award winning number "Ballad of two violins".We have fully loaded Kalashnikov's that say we're funkier than you,and are prepares to use everything at our disposals to prove it....we are NOT bluffinks!
Thank you for your time....what you have left, that is."
Back in the day,these records were the go-to place to find obscure beatz to sample the fuck out of. Luckily I have a couple of these, courtesy of the Ultima Thule record shop bargain bin section in the mid-nineties.....comin' up.
Tracklist:
SIDE A:

I actually got one Russian new wave/post-punk album on my blog, a band called Center, came out in 1989 and it's a French pressing :)