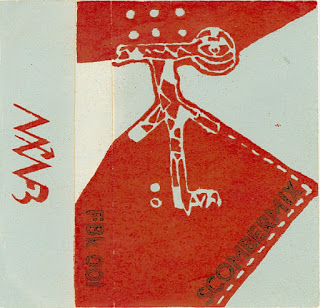 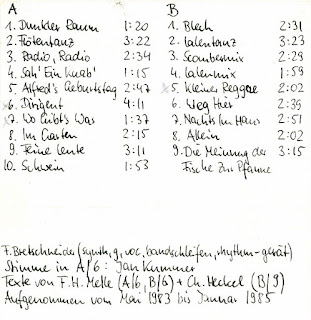 Frank Bretschnieder was the East German equivalent of  Alain Neffe,if not in profile, but in the amount of significantly weird and scrambled up musiks that he managed to squeeze onto the medium of ferric-oxide coated tape.
This,for all intents and purposes, was Frank's debut album,on his own frankly(pun intended) superb cassette label 'klangFarBe', from the lovely DDR town of Karl-Marx-Stadt,with its delightful post war Soviet architecture and a horrifying disembodied monument to the great man himself......check this postcard as if taken directly from a line in the Pistols' "Holidays In The Sun" pop hit. 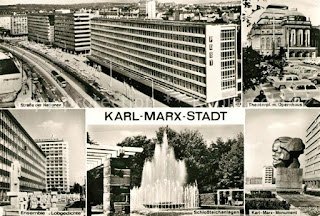 Hmmmm, lovely ain't it?
There are places like that all over Europe,but at least they had the excuse of being bombed to fuck .There are also towns like this in the USA and the only bomb attack they ever had was on 9/11,Anything over 50 years old gets demolished and a post modern brutalist skyscraper gets erected in its place. Hmmmm,sounds like what actually happened to the Twin Towers;demolition then erect an immense human-free edifice in its place. That said, The World Trade Centers were one of thee worst examples of brutalist architecture and deserved a couple of passenger jets crashing into them if you ask me....which you ain't,but I gotta write something irrelevant for the recording I'm writing about or I wouldn't be me would I?
Frank gives us a bunch of what can only be described as 'Experimental Electronica" at its abstract best. Its amazing that Frank was never arrested for making music like this,just like it was amazing that The Eagles were never arrested in the west for their crimes against western culture.Not that Bretschneider was guilty of such heinous crimes as 'Hotel California',but one had to be careful in Democratic Republic not to stray too close to decandence or a bohemion lifestyle,or you may find yourself pencilled in for a re-education program.

DOWNLOAD a postcard from Karl-Marx-Stadt HERE!
Posted by Jonny Zchivago at 19:44

no mention of F. Bretschneider as a future co-founder of Raster-Noton, one of the few exciting "Minimal Techno" labels?! (You may not care for the genre?!) As far as I can tell, FB released nothing under his own name between 1985 and the late 1990s--check out RAND and CURVE, and wonder how he got from SCOMBERMIX to that ....

Anyway, if you have more stuff on klangFarbe, PLEASE POST!!!!

Your slam on the Twin Towers (true-ugly as fuck) seems OK as long as you feel the US govt "let things happen," as I do. 3,000+ lives entirely expendable as THEE bullshit excuse for the trumped up (sorry) and accelerated "war on terror." What you say?
Love FB-never heard this one-many thanks JZ!

I don't always agree with some of your opinions in posts past, but fuck, you make me laugh. I like your style ;-)

Hi Steve, agree 100% with your assesment of the 9/11 event.However I am at pains to add that I DO NOT subscribe to the many wacky theories of how they and their conspiratorial zionist mates' did it. It was simply a case of allowing it to happen.I don't think the US Govt/CIA etc had much idea that it would be so sucessfull. Lives were obviously viewed on as collateral necessities,but i don't think they expected 3000+.We are indeed run by Psycopaths.
No Building 7 wasn't 'pulled',plenty of evidence that the debris and fires undermined its stability.....i've argued with conspiracy nuts on FaceBook endlessly about these things. If it wasn't for the nutty aspect of the argument it would have been taken more seriously.
Yep the towers were hit by passenger jets,yep the fires lessened the integrity of the building(didn't have to melt steel to do it),millions of tonnes of tower above the crash line more than enough for a SLOWERTHAN FREEFALL speed pancake effect, and yep air defenses were stood down, and yep the CIA probably knew about some kinda plot involving hi-jacked planes(but there are no facts to support this conclusion).
I could go on all day, but i got music to listen to.

Mr Albrecht...nah, no interest in Techno...whats the point? apart from dancing and background musik.
But Franky has a fine repetoire behind him indeed.
More KlangFarBe comin'.

Dear Anonymous, my opinions aren't necessarily actual Opinions.Purely advocacy for the Devil, or a way to make you laugh.
So basically...you got it buddy.

man, not to paraphrase anybody, but I HATE the fuckin eagles man...