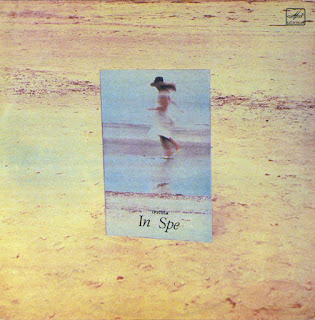 In Spe's second album had the same eponymous title as their first,which is a tad confusing,but it can add to sales as its possible to buy the wrong album, then buy the other to rectify your glaring error. It was a popular tactic for Peter Gabriel's solo work,and even The Plastic Ono Band's debut, which had two versions each by John and Yoko respectively, that had the same title and the same cover(with subtle differences).
The main man from the first 'In Spe' album, Erkki-Sven Tüür,had left to persue a career of artistic fulfillment as a proper neo-classical composer. So the remaining members had to try and do a crash course in neo-classical prog.Which to a large extent they achieved,despite the dodgy concept of the Typewriter as part of a concerto...in 'D'!?..whether that was the letter 'D',or the sound of the machine was in 'D', or if there even is a 'D' on a Russian cyrillic keyboard,its not explained.What is sure,however, is that they were never heard of again......read into that what you may.

DOWNLOAD In Spe NOT In Spe HERE!
Posted by Jonny Zchivago at 12:25

Hey Jonny, can you check on this link when you have a minute? Mediafire's stuck in this "Generating new download key" loop and it never makes it to the download page. Thanks.

Got the link to work tonight, so never mind