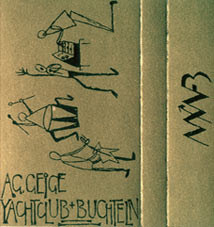 AG Geige were an East German experimental band, formed in 1985 in that hotbed of underground musical activity,Karl-Marx-Stadt. They were kind of German new-wave gone correctly wrong, mixing together elements of Floh De Cologne and Der Plan with all sorts of electro-pop and Krauty underground styles.
Any group who has members called Olaf Bender, plus Jan and Ina Kummer has to be worth a listen....surely?
Naturally Frank Bretscheider was a member too,so musically one has a reliable reference,and its a experimental as fuck.
If Olaf Bender isn't the perect name for an East German gay porn star then I don't know what is!?.....as for Jan Kummer,i'll leave that one up to your own filthy, filthy imaginations to contrive.

DOWNLOAD two kummers and a bender HERE!
Posted by Jonny Zchivago at 00:09

Aren't those the names of three members of Rammstein?

Well, well, you naughty boy. “Kummer“ means “grief“, and in those old pre-Youporn days, let alone in the GDR (where people learnt Russian instead of English at school!!) nobody would have ever thought of something else, for sure.

The same goes for “bender“. It has no German meaning, but I think it's only a reference to John Bender, the musician.

Actually this is quite good for an East German band. If you have any more by these guys would love to hear it,

Bretschneider and Bender were the founders of the famous experimental label Raster-Noton, before artist and musician Carsten Nicolai/ Alvanoto joined them.Jan and Ina Kummers children are actually members of Berlin based Band "Kraftklub".

Fyi, the group Necronomicon (from Aachen) had a keyboard player named Fistus Dickmann.

I was expecting to hear some good East German yacht rock, but it doesn't really sound like that.
There's a song called 'America. I don't understand what he's saying, but I hope it's not unflattering, otherwise I'm going to boycott this group and not buy any of their albums, nor go to any of their concerts, and tell all my facebook friends.

Having deciphered the prose on the tune 'America', they were referring to South and central America, plus Canada, and totally ignores the "United States of...."
Spo when AG Gieger come to your town, feel relaxed that they weren't slagging off the United States Of Shite at all.
East German Yacht Rock is yet to catch on outside of Liepzig so far.They all got Yacht there.
You got Yacht?