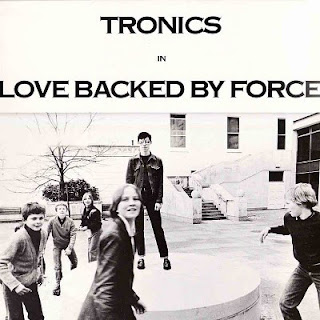 The UK DIY White stripes,or Shite Stripes(?),Ziro Baby and Gaby de Vivienne ,aka Tronics,and their first vinyl LP.Complete with pots'n'pans drums,minimal buzzsaw guitar, and a song about a girlfriend in a coma; which I suspect a certain Stephen Morrissey may well have nabbed the intellectual property of.
Certainly an unusual record, with a rare hint of Tudor era pastoral electronic chamber music popping up inbetween the stripped down Rock'n'Roll and minimal Punk.
Oh, and by the way,for those that are interested,Ziro Baby's Hair was done by Harold?.....it says on the sleeve.

Side Odin
A1 Charlie Manson
A2 Love Backed By Force
A3 T.V. On In Bed
A4 There Talking About Us
A5 Ice Flod Festival
A6 Ultra Pol
A7 My Baby's In A Coma

DOWNLOAD this with your own freewill HERE!
Posted by Jonny Zchivago at 09:28

Do you happen to have their "Favorite Girls" single?

i was a short time member of Tronics in about 1982.... apparently he wanted a backing band, and we (The Screaming Babies) rehearsed at ZBs flat a few times. he then invited us to a gig he was doing, which ended up being him backed by some ex-UK Subs. He convinced us it was a one-off and he did need us as his band. at the next rehearsal i stole his vacuum cleaner and that was the end of that party...

wow! i like this very much. and thE cOver. and ziro baby's name and hair.