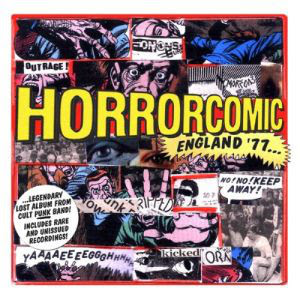 A fake Punk legend, the awfully named, Horrorcomic, were cobbled together from Lightening Records' backroom staff. Obviously Lightening couldn't find their own spikey tops to exploit, so they sensibly made their own...quite like Maclaren did with the Pistols. But in this case the members looked like beered up status quo fans with mid length hair and denim flares. There's also a suspicion that they were Gary Glitter fans, which doesn't nescessarily disqualify them from being 'Punk', as Johnny Rotten was also a Glitter fan, and so the fuck am I! The Glitter Band Guitar sound will live beyond eternity....unfortunately, Horrorcomic won't...but its enjoyable stuff nonetheless. 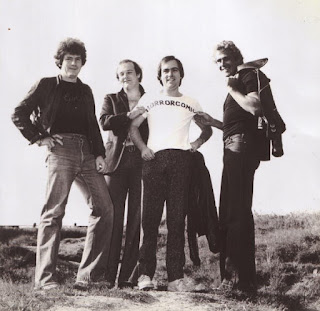 DOWNLOAD this horror HERE!
Posted by Jonny Zchivago at 22:14

Actually Lightning put out singles by about a dozen sort-of punk bands, but they were all the kind that got one-line bad reviews at the end of NME/Sounds' singles pages. You just know they had no chance of signing anyone with any credibility.

Indeed, there were some punksploitation classics on lightening, they had Fruit Eating Bears, The Jerks, among many other hastily cobbled together combo's. i've always got a soft spot for this kind of...well lets face it...crap!

Though long thought to be in-housers at Lightning, Horrorcomic frontman Roger Rep actually worked for RCA. He was a regular visitor to Lightning's distribution warehouse keeping them stocked up with Lou Reed LP's and the like. Lightning persuaded Roger and his old band Crackers to make a punk record as they were keen to tap into the punk market.

Crackers actually released a single in 1975 on EMI in France. A loud glam stomper, kind of like Mud with punk guitars. Apparently appeared on New Faces too.