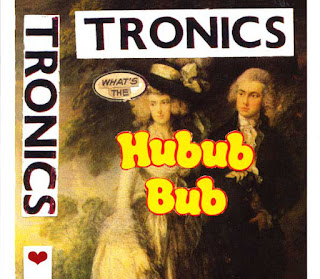 Formed and fronted by some fine upstanding fellow called Zarjaz Baby, also known as Ziro Baby? Obviously not the name on his birth certificate. Zarjaz was once reported to claim that he was married to Marilyn Monroe in the afterlife.

Bit of a loony then, but nonetheless a very early exponent of the DIY art form.More frequent than not,performing as a duo,like some abstract version of The White Stripes but without the tiresome record collection.
What's left behind reveals itself as a low-speed collision of Velvets guitar violence, primitive tape collage, 50s rock n' roll, and an intergalactic radio broadcast, marshalled nonchalantly into some serious tunes by the outsider pop sensibilities of nutty Ziro Baby. Apparently recorded in a kitchen, these ramshackle tracks couldn't be more minimal: aside from the clipped guitar, there's often little else besides some seriously loping drums (think of a hungover Mo Tucker, or early Sun Ra) and Ziro's weasely vocals.

DOWNLOAD to find out what the hubub wasn't all about HERE!
Posted by Jonny Zchivago at 08:45

so i found an interview of this guy and he mentions this band "Red Balune"...and i found it on youtube and wow, it's pretty nuts. Do you have any of their.....output?

wow thanks! What do you think?....i'm digging it