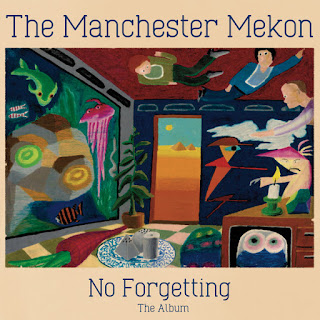 Sticking in Manchester,we got the Manchester mekon,who,as members of the manchester musicians Collective, appeared on the "A Manchester Collection" compilation,on Object Music....as previously featured on these pages.
During the 'Punk Rock Revolution',there was always the visible prescence of flare wearing long-hairs who seemed to carry on as if nothing had changed.....which made them more 'Punk' than the legions of denim and leather clad sheeple that destroyed it all.

The Manchester Mekon was made up of several of such persons,who preferred King Crimson to Eater, and Frank Zappa to Slaughter and the Dogs.
Prog tendancies are indeed revealed on a few of these mostly unreleased tunes;but also a nod in the direction of fey 'indie' style songs that wouldn't have been out of place in the 'C-86' era.
Be yourself, was the mantra during the 'Punk' years,but so few actually did.
Over a period of five years (1977 - 1982) the Manchester Mekon played about fifty gigs in and around Manchester, released seven tracks on local labels and rehearsed once a week. This album covers their entire career, contains the full range of music they played and includes live recordings, studio recordings, home recordings and even rehearsals. Two tracks were previously only available on Manchester Musicians' Collective compilation albums. Some were never released, until this Cd surfaced a couple of years back.
(Check their sole EP HERE!)

"A small but brilliant body of home-spun, humbly-recorded pop and experiment that feels, to these ears, like one of the ultimate representations of the warmth and generosity of the UK DIY era."
- Jon Dale(the bloke who wrote the sleevenotes)

Don't forget to DOWNLOAD it HERE!
Posted by Jonny Zchivago at 14:12

I had a lot of this stuff back in the day....it's great to hear it again.
If your interested I cleaned up your header .......

Thanks for making promo of tihs wonderful album. However, to recover the sound and make it available again is not for free. Discos Transgenero is a non-profit asociation to preserve these kind of sounds. Would be nicer if instead of sharing the audio for free makes reference to the effort and work that convey to release this and link to our bandcamp.

I suppose i couldn't have mentioned this record at all?
My association is more non-profit than yours it seems.
Especially like the suggestion that i am not nice for doing so.
I'll make reference to the hard work that it takes to run a blog too...not...because it ain't. Doing something you love isn't work.
I will,however,link to your bandcamp as this is ooooooold stuff.