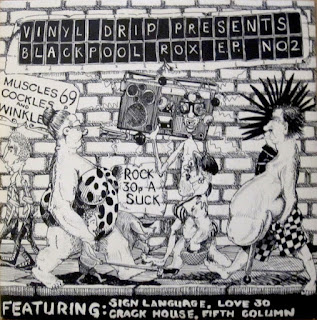 Blimey, there was a second 'Blackpool Rox EP"????....the space of three years between the two EPs illustrates the difference between the class of 1980 and !983....as in nearly everything in 1980 was brilliant, and nearly everything in 1983 wasn't very good at all.
Four bog standard post-punk tunes from four also-rans in the stakes to be the fifth best band in Blackpool.

DOWNLOAD a littler stick of blackpool rock HERE!
Posted by Jonny Zchivago at 19:47

I've had this for years now, likely from you or one of the other First Wave Blogs (RIP) around a decade ago now. The song Jesus Loves You by Crack House on here is worth the download alone ten fold Jonny! Since it's free that isn't much I know still but make it the time and do that ten fold and it's still worth it by far. The song is bloody brilliant and I treasure the fucker honestly. It has that slow cow punk drowned sound I love and really reminds me more of a Kiwi or down under garage band from the early 80's than anything else. For some reason it also makes me want to think of the Screaming Blue MeMes if they ran out of pixie sticks and their blood sugar was low (wtf?... dude has a puffy face and sings about the Flintstones and shit so i think it's a safe bet in a metaphor... fuck off then... also i'm not entirely sure i know what a metaphor actually is either... oi.) but that isn't really accurate and my mind is just bored and slightly lonely maybe and i'm just grabbing at straws for lack of anything else better to do on a Friday night here in the hellhole of plastic coated piss ants with creamy lactose intolerant centers that is Los Angeles. Everyone is a whore but I can't get laid. Yeah I am the very life force of fun and no one is greater than me. I am a white hip-hop artist and known by near all as the greatest raper ever in this county but still can't get any nookie. If I'd known it was going to be like this I would have never ever did it all honestly. So you can take that song I said I liked on this post and put it in your disco dystopia playlist someday for me okay? Great then. I like the Love 30 song too and it reminds me of an 80's deathrock band demo before they found their twink of a self proclaimed poet reading comte de lautreamont pretentiously under the shade of some community college willow tree in the middle of campus on an otherwise bright sunny day. This recording sounds like a hardcore band that has recently run completely out of speed but must still play as they had booked the studio time and payed up front like suckers. In other words I love it and like I said before... I am fistfuls of straw here Jonny. Now can you sign my papers for group participation hours and round up so I can give it to my probation officer on Monday please? Oh, and also if not too much trouble pee in this cup too maybe... but only if you are really off all that french cheese like you claim to be? As I don't want to go back to jail smelling like a rat you know. That is either brilliant or completely fucking stupid that I just wrote. Anyways I got a hot date on Chaturbate so I gotta go. Going to have her pee in a cup too... but for an entirely different purpose. I will send you the screenshot video I capture later. Give my love to the wife and kids for me Jonny! Bye for now & thanks for the urine chum! ☻

Andy knows what the fuck is up that was inspiring

Andy doesn't talk to me nowadays.