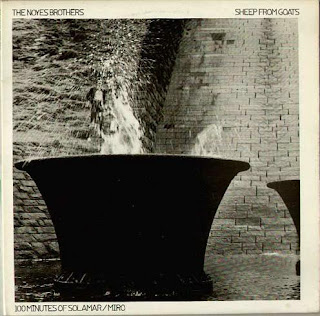 The Two Stevens, or The Two Ronnies (any excuse to sdd a link to the Fork Handles sketch), of DIY-Garde in Manchester, were Steve Solamar, of The Spherical Objects, and Steve Miro, without his 'Eyes' this time(as in Steve Miro and the Eyes right?). Collectively they called themselves The Noyes Brothers.
As previously featured as side two of the "Do The Maru"compilation,The Noyes Brothers project extended to four sides of vinyl, called "Sheep From Goats".
'Experimental'is the genre this stuff is usually filed under in yer iTunes collection.....not quite experimental enough to earn the golden moniker of 'other' however.

OBJ 009
A1 Impending Doom
A2 Away We Go
A3 Repercussion
A4 Bo Scat Um I.D.
A5 Marlene
A6 Night Sky Vision
A7 Byte To Beat
B1 Why Did It Fade
B2 I Am You
B3 On The outside
B4 Dream
B5 Archetypal Memory
B6 It Must Be Vibration
B7 Pointless
B8 The Mutant
B9 Ingmar The Dog
B10 Some Times

Thanks JZ. I was listening a couple of nights ago to this on Spotify. Wishing some soul on the internet would upload it. wow!

I heard your call on the astral plain.