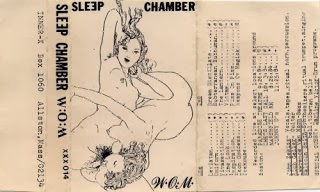 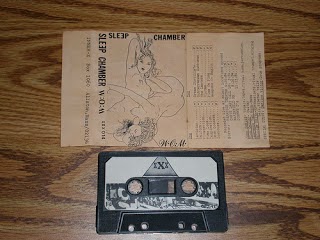 Ohhh! Thats a bit rude innit? Nazi's or Lesbo sex on yer cassette cover is an assured way of getting noticed. The trouble with Sleep Chamber is He (John Zewizz) means it! Easy way out lowest common denominator shock value, can often be used to mask a lack of creativity, or "talent". In this case, this is sort of true, but I kinda like it. Mr. Bean on mogadon makes another appearance reciting bad echo-laden poetry over a backing of half-assed synth sequences, with some terrrible analogue drum programming(by someone called Darline Victor); it almost sounds improvised,which if true, would make this a fine work indeed! I dunno weather I love or Hate this generic kind of Industrial musik, 'cus every time I listen to it, i think I could be doing this myself instead of sitting around doing nothing! Well, sometimes its good to relax and let some creepy american geezers do it for you. Would prefer a variety of themes though, as opposed to constant obessions with taboo sexual practices. N.b. : - W:O:M stands for Weapons ov Magick by the way! Alluding to another immensely boring over-subscribed subject, Aliester Crowley.....Yawn. Recorded Live at the following venues: A1-A3 recorded live in Marshfield, RH 8:26:84 A4-A6, B4 recorded live at Johnny D's 11:25:84 A7, B1-B3, B5 recorded live at Chets Last Call 10:3:84 B6 recorded live at the Paradise Theatre 9:26:84