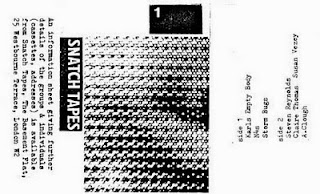 Snatch Tapes,one of the corner stones of DIY electronic experimentation, released many fine but obscure releases from 1979 to 1981; some impossibly obscure. The sound policy seemed to embrace lo-fi electronic exploration, verging on the ambient and straying into the realms of Noise.
The brainchild of Phillip Sanderson, who contributes to this cassette under the guise of Clare Thomas and Susan Vezey, Snatch Tapes was the starting platform for the prolific electronic composer David Jackman(not on this tape),who has released loads of obscure stuff over the ensuing 30 years.
The excellent Storm Bugs, another anderson Vehicle, are the stand out here.With a distorted shortwave radio electric swirl, set to a metronomic thud.Early Cabaret Voltaire is a reference point here.
Lots of the classic DIY sound here, muffled ferric oxide sound quality, cheap drum machines, budget effects units being abused to breaking point; the bizarrely monikered Karl’s Empty Body sounds akin to being in your kitchen while some awful band are tuning up deep underground…….heavenly!
Steven Reynolds actually does sound like a numbers station recording(check out ‘The Conet Project:Recordings of Numbers Stations’ Here!), as do the Storm Bugs and A. Clough!