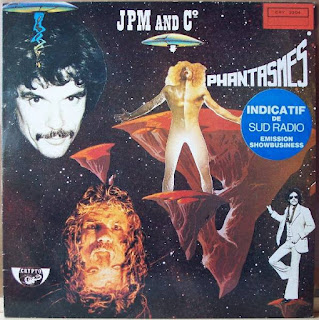 Some people take all kinds of class A drugs to try and make music that is unfathomable and "Out There",but end up making such unquantifiable rubbish as "We Built This City On Rock'n'Roll" by Starship, featuring members of trippy hippy psychedelic purveyors of silliness,the Jefferson Starship. Drugs make shit art,fact, and coloured alcohol leads to cutting your ear off and posting it to a young lady who hates your fucking guts because you ain't rich.
Now Jean-Pierre and his crazy prog Disco mates, namely himself, don't need nothing but their twisted perceptions of what music in 1977 means,and that rarely used Class Z drug, imagination......oh and probably normal illegal substances too I guess.....nobody's perfect.
Not many musicians are alone in a ghetto of their own making, but Jean-Pierre Massiera has voluntarily imprisoned himself in a progressive Disco hinterland,rarely repeated elsewhere.
France is never slow to tell everyone how many types of cheese they have (in fact far less than the UK...check it out),but one French cheese that rarely gets mentioned is French music.This particular variety sounds not unlike a two side long love making scene from a James Bond movie,dubbed into French.
There are those who would say this recording is a bucket of Merde.Maybe so,but feel rest-assured that there isn't another record out there,or "Out There",that sounds like this one.....not even the United Kingdom can say that......but they do have shit loads more cheese types and varieties that the self-crowned kings of Cheese;and more types of quality pop music that the king of progressive cheese, Jean-Pierre Massiera, could ever possibly throw into the rock'n'roll fondue.
Tracklist:

It's 9:00 AM, and I figure that's why it's making me feel sick. I'm going to have to give it another try later, when I'm not so susceptible. That said, I've always been nauseated by Disco music, on many levels. But this one does feel special. Disco in Hell.