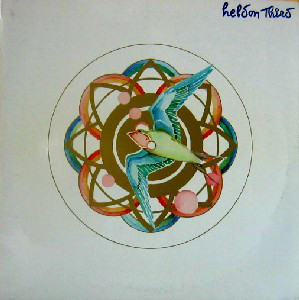 Did they mean to say 'It's Only Rock'n'Roll' but it got lost in translation,or is this the correct title?
It is however,Heldon's final appearance on Pinhas's own label, Disjuncta,and its a goody....it's always Rock'n'Roll and I like it,like it,yes I doooo!
But this is,thankfully as far away from the Rolling Stones as you can get and still call it Rock'n'Roll. Rather too many Drug references going on for my liking,but at least there ain't no lyrics to further compound my disapproval. Nice hair,effing gr8 guitar virtuosity ,and effect laden,electronic ear abuse from some Frenchmen who dig Fripp and Eno....don't get to say that very often. They ALL (the Frogs) like Zer Rollin stonsss without exception,but they so make good unadventurous food,so we'll forgive them that faux pas.Stone the bleedin'crows guv'nr, even i like that Emotional Rescue album.....weird shit going on there.There isn't a French person who doesn't worship Zer Doorsss either,and more bizarrely Superrrtromp. Ask a Frenchman what they think of Heldon,and they wouldn't be able to place the name,incredulously wondering why an Anglo-Saxon would want to listen to a French group rather than Led Zeppelin(they can pronounce that one) or Leonard Sky-nard!? Its like that moment when Bowie was on German TV,and the interviewer asked the David what German music he liked as he had heard that he was heavily influenced by new German music.His Bowieness asked the audience if they had heard of Neu and one voice shouted "Ja!".(its on YouTube somewhere)
There are indeed other French groups that are worth listening to,and we shall discover them over the coming weeks, said Humpty;or if you're american...so said The Cookie Monster.
Tracklist:

Thanks for the Heldon – "Third : It's Always Rock'n'Roll !

You'll be different in the spring.

In Italy we had a glossy magazine called, arghh "Rockstar", and in one of the last issues before bankrupting, they interviewed Sonic Youth, asking them also if the knew italian bands, and they answered that they loved TAMPAX, to the embarrassment of the "rock journalist" that had no idea who they were..

Actually I had produced an album by them, a little weird masterpiece, plus a a blasphemous single, and another blasphemous rap (when rap was not fashionable in europe) 12", are still unpublished...

In the scene there was the voice that this magazine was "heavily inspired" by the french rag "Rock & Folk", and some of its writer were considered form the best writers outside UK...
Many years before, when i was steel a teen, i went biefly in France with my parents, and my first interest was to reach a newsstand and buy a copy of R&F:
well, a couple of months later, some of the articles were translated in italian, word by word, and signed by italian "rock critics" on Rockstar...
But they were so lazy that they translated also the mail section, changing the names of the guys with italian ones".
One to the "critics" of that magazine, is today considered one of the major "rock experts" in italy.. He now writes for Repubblica, the major "left (left?????)" wings newspaper, and once reviewed a PIL concert, reporting everything down to the numbers played in the encore...
Problema was that after the second or third song the band left the stage, with Rotten cursing the audience cause they were trying to be "punk rock" and didn't stopped spitting to the band....
that is italy

Yeah Lilith, typical metropolitan luvvies the Sonic Youth. they'd each their own Buttocks to get one over on their obscuro friends in lower manhatten.
Tampax got on my politically incorrect compilation,"Banned bands and wrong songs" so they gotta be good.....got any files of the album you produced for them?...Tampax not Sonic Youth.
So,Are you Italian then or what? Or a diplomats daughter or something?
You seem to get around a bit.

thank you! interesting selections presently, as always really. nice one