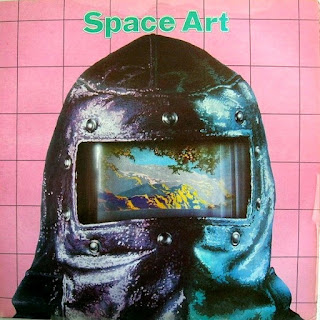 The French have a nasty habit of electronic duo's who wear disguises ,suggesting that they all could possibly the same pair of mutherfukers doing all of 'em. Along with Space "Art", we had the similarly monikered  'Space', no art involved, who hit the top of the world charts with the catchy astro-instro "Magic Fly";also from the golden year of '77. One would suggest that Space Art had to add the 'ART' part when Magic Fly hit the charts just before they had an album out.......unless they were the same duo pretending to be two different entities. This could also explain the inexplicable phenomenon that is,and thankfully, now in the past tense, Was , the bloody awful, Daft Punk.
As the Residents demonstrated,wear a mask and you become ageless.The residents will likely still be performing into the 22nd century,and I hear that Space Art are back too!I like the concept.Pub Rock Bands do the same thing, but without the masks,and without any original members.
Often described as cosmic synth-pop, The duo are considered pioneers of the electronic genre,by French people....and you know they might be right for once?The Froggies reckon they invented everything,and they do love their genre's,but get confused if any music they encounter doesn't fit snugly in a comfortable bracket.
"What music iz zis",they inquire,"Rock?Punk?Psychedelic?Chansons Francais?"......yes Punk is different to Rock in the very French world of the Frenchy,and all Americans are English,and Canadians are French....they're a bit weird.I blame the cheese.They should import more proper cheese from the world's biggest Cheese producer,the allegedly crap food experts, Les Anglais!
Cluster tried the same thing as Space Art, in trying to make some accessible cosmic synth pop with "Zuckerzeit" in 1974,but lacked the power of a real drummer,which Space Art had, and,more importantly, the catchy tunes,which Space Art also had.
Alas, now everyone owns a copy of Zuckerzeit,and Space Art are well and truly forgotten.
Who wants their album stuck on a alaphabetically filed record rack with a bunch of trendy Krautrock and Italian Prog anyway.Fuck that Shit!

Hi Jonny Zchivago....many thanks for sharing this album....It is very much appreciated all your precious time and hard work that goes into your wonderful music blog that has kept as all sane through these troubled times we are all experiencing around the world.
Music has the potential to make us all feel connected whatever our tastes in music...Love & Peace ....Stu

I'm an old fart; I actually own this on Vinyl! Bought a second-hand copy in the early eighties. I think I have copies of some of their other releases (in mp3 format only) buried away somewhere.

Thanks for uploading this.
Cheers!

I guess Cluster`s guys did not have phone numbers by Jaki, Zappi, and Klaus.