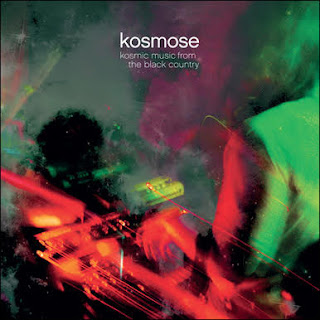 Straight from the "Black Country" in the dark ages of the mid-seventies came Kosmose's kraut-a-like improvisations; but for us English, the Black Country means grim hell-holes such as Stoke-on-Trent,the home of D-Beat punk,like Discharge and GBH. If you were caught listening to some Belgian Kosmiche music anywhere in the black country of the UK, you'd have been beaten up and called a "PUFF!" in no uncertain terms.There was no sanctuary,and everyone usually bore an uncanny resemblance to Quasimodo's uglier brother,and that was just the women(I know i've used that joke before, but it's a good one!).Although that observation was based on a particularly grim section of Stoke City fans I have encountered on many an occasion,so I may be wrong....even though Robbie Williams grew up there,if grow up is the right word in relation to Mr Williams......he was a Port Vale fan,from the weirder side of town,so one never got to visit vale park too often as they rarely appeared in the higher divisions during my Hooligan career.
One therefore assumes that "The Black Country" in this incidence is none other than Belgium.The place that is the butt of the dumbest jokes in France,by the dumbest Frenchmen,where it is understood that Belgians are stupid,and the French are far superior. This misnomer is made even more ridiculous when one realises that it should be the other way around.....especially when it comes to Beer, Chocolate,and...music.Even the famous 'French' singers turn out to be actually Belgians in disguise, like Johnny Hallyday,Jacques Brel and Plastic Bertrand; or collaborating Nazi Whores like Edith Piaf. Quite like Canadians were in the USA,with such luminaries as Leonard Cohen,Joni Mitchell, and Neil Young to name but three...although I have it on the strictest confidence that Joni Mitchell was NOT,and indeed, NEVER WAS a Nazi Whore!
Of course Belgium's golden years were still to come half a decade after 1973.It was left to the French to make the prog,which preceded a steady decline into the laughing stock of western Europe they are now.Magma excluded.
However, these archive tapes of what must have been Belgium's premier Prog band,prove that kraut-style prog was alive and vibrant north of the Maginot line.
In a country as compact and bijou as Belgium,which was twice used as a short cut to get at the British Expeditionary Force, it was the synth and drum machine that propelled the local populous into the 'very good file' of early eighties pop music.Forming a solid buffer zone,for once, between Germany and France.A battle of the Belge that the Belge actually won. Helped vastly by the actions of one Alain Neffe,founder of DIY cassette culture label Insane Music.
Neffe was also indeed a founder member of Kosmose,and deserves some kind of medal (The Golden Cassette) for the excellent resurrection job he made of these dusty old tapes.
The music is a heady mix of kraut style kosmiche,free jazz,with hints of CAN and most other things Krauty.Absorbed through a semi-permeable membrane by the musical process of Kosmosis,which one assumes is what the gist of the band name is?
Tracklist:

Yeah this is mindblowing.