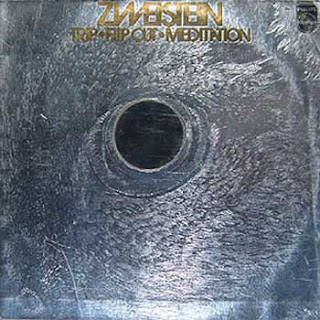 One always detects the odours associated with a prison camp latrine when the words "Triple Album" are mentioned. This so-called,'Kraut Classic', being one of them, and unbelievably rivaling The Clash's "Sandinista" as the most irritating and pretentious of the genre. Even Holgar Czukay would have struggled to edit this 100+ minute fuck about down to anything more than five minutes of  BBC Radiophonic Workshop out-takes for a kiddies sci-fi TV outing. There's also something of the Ron Geesin about it,and probably even more irritating than that!?...if that's possible. It also treads that narrow path of failed attempts at 'Humour' in pop.That coupled with the fact that it was made by some krazee Germans on LSD ja!?, naturally means proceed with caution at the best of times.War guilt has a fuck of a lot to answer for.
"Vee are not zat bad after all,ja Englander? Ve are KRAYZEE MUTTER FUCKERS! Not only zat, ve izt Krazee mutter fuckers viz a reverb unit and a backwards running tape recorder"
I dunno if this is on the trainspotters guide to the Nurse With Wound List again,but it sounds like it should be. Virtually any crap made in Germany from 1970 is already,so why make an exception with this one,even if it is scraping the bottom of the latrine?
It's got a freaky cover anyhow,so for that reason alone it's worth having in your record collection...just never play the fucker is all.
I guess this is an ill-advised attempt at describing some kind of silly acid trip nonsense,but missing the undoubted charms of Dr Timothy Leary.
Tracklist:

That cover image is just a glory hole. The question for the listener is "which side of it am I on?"

Well i certainly feel fucked up the arse through a gloryhole after listening to this bollocks. Whether thats the correct side or not depends upon your point of view, sexually.....others may take that as a recommendation.I'll leave interpretation of that analogy up to the individual.

Not to spoil the fun, but...Round perforation in the cover contained a MIRROR. I once had a copy, scrounged up a copy for mere pennies back in the 90's, way USED with what looked like deposits of some gummy material (burnt weed?) Sold the POS in the early 00's on Ebay somewhere north of $100. Sans mirror no less. Go figure.

This project was actually instigated by Suzanne Doucet who was a successful pop (Schlager) singer in Germany in the 60s. In an attempt to transmit her experiences with LSD. Later - be warned - she became a pioneer in new age music.