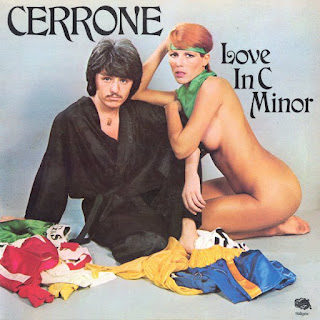 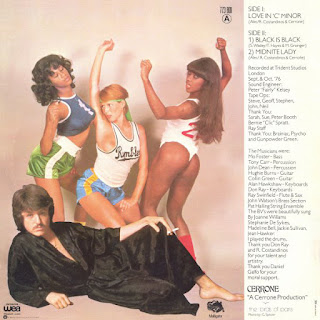 Dig that cover brother!?
As well as the wonderfully weird world of JPM, France provided the world with some the most unwoke,most nafferroony,and downright creepy Disco music ever invented.The king of which was undoubtedly one Marc Cerrone,of Supernature fame.He discovered early that the quickest way to liberate a young lady from her clothing if you were a short-arsed inadequate with a hair-do the shape of a Helmet was to make danceable music and surround yourself with a hareem of part-time models. He certainly was the most handsome man in the room when thse cover shots were taken. This also is a time honoured method of selling large amounts of records to young men looking fot a wife and a wank,and to young ladies on the meat market searching the discotheques for a bouffanted fool with a Triumph Spitfire parked outside. Though in Cerrone's case that would have been a Citroen Deesse with the hydraulic suspension that always went wrong;but at least they couldn't clamp it if you parked on a double yellow line.
The Irony of all this, of course, by-passed the French completely,and indeed most of the Disco vulnerable crowd.Aids came too late to save us from this fate.That or Punk Rock anyways?
Punk was indeed responsible for saving your author from this toe-curlingly awful fad,but also helped me remain a virgin for long enough to know that the motives of this music were not the most pure and honorable.So the notches on my bedpost were badly affected by the end of the post-punk era.....but at least I never got Aids...or Ayds!
Now, however,free from the shackles of teenage principle,I would of course go dancing to "Love In C-Minor",or making love to a minor which was standard,nay expected, behaviour in the 70's;and i would expect to be laid for doing so,demand my rights as a male idiot,and throw that consent form in the garbage can. All this shit has been re-formalised since the Disco Fad was resold to us as Club Culture by the CIA,but with added Drugs;and has stayed with us until this present day.Er...thanks? CIA?
The mainstream moral majority fools in America,the land of the Prude, managed to edit out all the 'dirty' talk at the beginning of "Love In C Minor",but ironically left the orgasm sounds in!?...they (the justice league of american christians or whatever they were called!?) probably had never heard a woman climaxing before so just thought it was bad vocal harmonies,or even French being spoken?!
Just remember, it all started HERE!
Tracklist:

Nowadays Cerrone could be impaled by some collective or the other just by showing that sleeve.
The world has turned into a politically correct nightmare where the word "ass" can take you to the lethel injection.
Thanks for posting a lot of old but fresh stuff for posterity.

They know who you are Anonymous....there's no where to hide.
Indeed,the brain police are winning.Its just a matter of time before I get deleted for any number of "unwoke" things i write. I make fun of Cerrone not because I am Woke,its because I can if i want to....and i will. Very soon the human race will be turned into a frightened smear across the 'Ass' of cinilisation,and die!