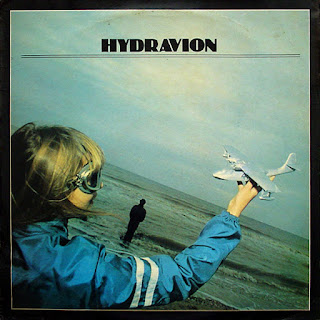 Let's start off with a review i saw of this on Discogs:

"Terrible dull, empty and meaningless album. No real melody, there's not a single musical moment. All is more like rudimentary experimentation in "progressive" style. No instrumental, nor "song" writing abilities are shown despite of being progressive music. Compared to any other similar spacey contemporaries (as to a similar empty Heldon) it's absolutely a wasting of time. Go and find houndreds better in the genre."
After reading that, you just know that this album has to be brilliant?
I like my music empty and meaningless, so what? After all doesn't that describe existence itself? There's a meaning to the meaninglessness....ness. More than there is to existence at least.
There's something of the 'La Dusseldorf' about this French Krautband. I thought La Dusseldorf were joking when I first heard them, and Hydravion most certainly are NOT joking.It also reminds one of those Soviet Union official disco bands that cropped up on state label Melodija from time to time....and I certainly know they weren't joking either.Joking could get you into serious trouble in the Communist Bloc.
Of course the French notoriously cannot laugh at themselves,they can laugh at disableds or Belgians,but NEVER, at themselves; so it figures that this electro-prog trio mean every dull swirling note and therefore is,predictably french,and more than a noggin pretentiously, 'ART'.
Yes, it's empty,there's no melody, no songs, but it's space rock made for surfing the event horizon of the super massive black hole in the centre of the music industry.
Wanna piss of that aging Punk with the Joy Division T-Shirt next door?....then play this at toe curling volume,followed by La Dusseldorf and then Argo's "Discophonia". Guaranteed to push the aging Punk neighbour over the edge, and totally fuck off the poor chap who wrote that dreadfully conservative review above.
I guess Hydravion is French for a Flying Boat,which,if there was to be another great flood sent down by our loving creator,then a flying Ark would be a great way to get around and rescue all the species left on the planet while we waited for the water to drain away.Luckily no need to save two of every fish,and controversially, no gays allowed! Even no Gay Chimps allowed,unless a third chimp is recruited as a surrogate chimp for future births to repopulate the devastated planet.I suppose the sea level would have to exceed the top of Mount Everest,so that would make the oceans at lease 29000 feet deeper than it was before we were all taught a lesson.I assume we would all starve to death after the water levels somehow drained away,so what was the point in creating us anyway....more meaningless...ness? No-one will be volunteering to be the new Noah either in the "Me Too" era, as he's usually biblically required to have sex with his daughters.....unless God hasn't kept up with the times....Again!?
That, essentially is what this album almost certainly Isn't about;but, as it's meaningless one can always insert any meaning you can feel comfortable with,and that takes imagination.A quality few human beings possess in these daft ol' days innit?
Tracklist

Seems like the guy who wrote the aformentioned review on Discogs used the very same words to describe the first Hydravion album, maybe Philippe Besombes stole his girlfriend or married his mother.
I think i finally have one resolution for the year to come, to begin a collection of "terrible dull, empty and meaningless albums"...Oh no ! I just realized that i've already started it years ago.

Found this on a dustbin ages ago, listened to it once and then forgot all about it...
Well, the Discogs review is off center, and your review is "mucho gusto" to red, and, yes you put great content in its meaningless and emptiness, but still, this record is utter crap.
And the comparison to russian state approve disc is right....
In 77 also in kosmische germany, TD was already putting out boring stuff...

BTW, what i think is that instead of the aging punk neighbor with the Joy Division t-shirt,
this is the record that Euronymous was playing when they were living in the Mayhem house outside Oslo, that got Dead mad at him, and that fueled the teory the Dead death was not a suicide but a revenge, and maybe the real reason for Burzum then killed him...
ah, 70es electronic prog, how many damages has done...

Still, the second part of "triste fin" (Sad End), the only listenable part of the record, could be a premonition of all this Mayhem stuff...

On a dustbin or In a dustbin...myself I found mine in the bargain bin.
Top marks for remembering names of them Mayhem burks.
Very underestimated is the power of some extremely dull and pompous Prog albums to be the catalyst for some extreme behaviour."Tales of Topographic Oceans" being a famous example.....i couldn't get through side one before wanting to slash someone elses wrists....it has a very dangerous power that goes so far beyond Boredom that it should be stored in a locked bomb proof box. In our house it was stored in the attic,away from our glam records collection, along with my waddington's Ouija board which my mother confiscated from us
Its a dangerous world out there.