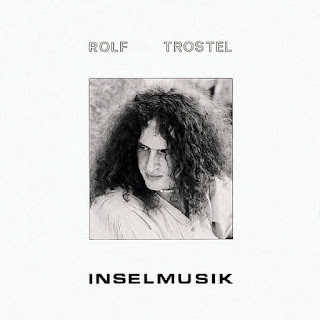 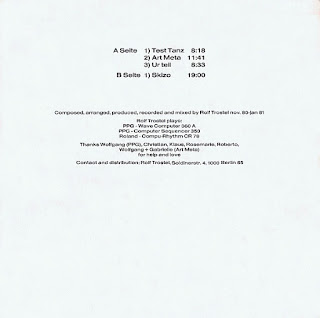 Like most German musicians in the 1968 to1982 era, Rolf looks like he has someone else's hair. He would also like us to know which synthesisers he's using;boldly printed on the rear of the cover below the Track listing.He's got a PPG wave,which may or may not be the same PPG Wave that Midge Ure used to play the 'Bell Sequence on the Band Aid "Feed The World single.One of the many crimes against art and culture perpetrated by this short scottish monster..
However, having said that, if the charity single for the starving had been made by Rolf Trostel the Ethiopians would have probably gave all the money back and organised a concert for us poor bastards in the west to save us from life threatening rubbish like Kajagoogoo and their equivalentia.(just made that word up by the way).
I'm told that Rolf was, and probably still is, a Peter Baumann solo fan,and that this self-released LP sounds exactly like the least hippie looking one from Tangerine Dream.
On this evidence I may check out some Baumann....or maybe not.
Therefore, this qualifies as Berlin School,so if you dig this school type,you may wanna check out Rolf and his one man army keeping Baumann Berlin School alive.....well,as in  alive forty years ago.Good for chill-out rooms at some 'orrible dance auditorium in Ibiza, or  a moratorium actually in Berlin itself.
This album could feature in the intermission of my fantasy gig at a renovated Hitler's Bunker in an alternative reality.Supporting Joy Division and PiL mark one,...wait a minute, wasn't that the line-up for the Futurama Festival, September 1979 in Leeds UK?...obviously minus Rolf Trostel of course.We were so spoilt back then.
Nowadays you'd have to fight off Coldplay and Radiohead,desperate to get the opening night in the Bunker on there swollen CV's....only to find that The Arctic Monkeys had beaten them to the punch. These certainly are shit times brother!
DOWNLOAD rolf's schooldaze in berlin HERE!
Posted by Jonny Zchivago at 14:57

Apparently "Inselmusik" = "Island Music"? Not to be confused of course with "Incelmusik" which is incidentally a whole other type of island music. Cue the Ray Davies tune!

Baumann's 1st solo is good, especially side 2 w orchestra.
And his new one doesn't suck. No pop attempts. It would be
better if he had used any mellotron at all.

Unknown nails it. Was eagerly awaiting the play on title "incel" joke.

Neuland LP w Baumann & Haslinger from 2019 worth a spin, too.