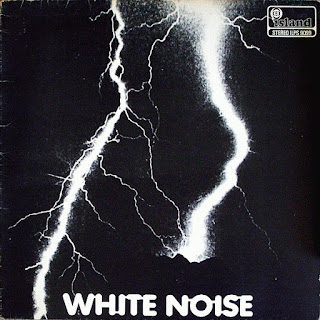 Island Records eh?
Dunno if it was King Crimson, or that Richard and Linda Thompson album that first exposed me to the inner sleeves of Island releases, which was basically an advert for their other releases; but that is where I first saw the White Noise album. I had no interest in finding out what was on it,thinking it was some third rate hard rock group or something like Free,but the image stayed with me.
I always had a minor obsession with the BBC Radiophonic Workshop, and some thirty years after its rlease it came to my notice that Delia Derbyshire and Brian Hodgson were behind the electronics,is not the concept,which was the idea of american composer bloke David Vorhaus.
A lot of people say they are frightened shitless by parts of this record? Can't say I am one of them, being wholly desensitized,but I can certainly see why...its the screams y'see. The mere mention of 'Hell' especially if accompanied by the sounds of tormented souls can induce dihorrea among a lot of those unfortunate enough to have been brainwashed by a church in their delicate formative years.
The BBC moonlighters ,which they were doing a lot around the cusp of the seventies to earn a decent crust, are credited with Electronic Sound Realisation......in other words they did the hard work......the same as they did at the Beeb,for no credit. At least Vorhaus gave them a credit I suppose. The subsequently Shite Derbyshire-less follow up albums only emphasise who supplied the magic for this pioneering major(ish) label album. Its equivalent I suppose, has to be the "United States Of America" album from the same year,but that one is far more hippy than 'An Electric Storm',which does have its hippy-trippy moments,but ultimately falls firmly on the dark side of the room. It is often referred to as a 'Cult' album, which means it didn't sell any units when it was first released,but was a slow burner for decades until it now gets mentioned as a groundbreaking moment in Electronic Rock.
I doubt miss Derbyshire or Brian ever received any money for their role in this,but at least we now know who made it.

DOWNLOAD a noise that is white HERE!
Posted by Jonny Zchivago at 10:12

Noone and nothing ever came close to this flawless beauty of a record, including some of the best avant-pop tunes ever written, still sounding unbelievably fresh or at least timeless and other-worldly.

I have fond memories of "The Island Book Of Records", a little catalogue c.1972 full of album cover images and track listings.

On the later White Noise stuff I believe David Vorhaus used a synthesiser of his own design which instead of a keyboard had something like a big guitar neck as a ribbon controller, played while holding it in a phallic position. Anyway, there was a picture of him with it and that's what it looked like.

Yes, i too recall a phallic bass synth thing in a crotch holster.....not to be encouraged kids!
Yeah Island were quite progressive weren't they?...except for all that bob marley stuff of course.

Indeed wolfie, having not played this very much i understand where you're comming from here. Also i'm so obsessed with Delia at the moment that anything she has a hand in is a work of genius...i'll get over it in a week or so.

plans for the other white noise lps?

No Kevin, this is the females in electronic music section. White Noise 2 onwards is strictly blokesville baby.

Yes, Johnny, you'll recover soon. But don't forget to enjoy and praise this record once or twice a year for the rest of your life! :)

I'll confirm that The Visitation is scary as shit.

Totally unique album! Combining twisted pop tunes with weird sounds is the best approach to psychedelia rather than banging guitars. What a pity Mrs Derbyshire hadn´t experimented more with pop music. I wonder what it would have sounded like if she had produced Syd Barrett. These songs on the b-side are definitly scary. I think the last one was used in Hammer flick "Dracula A.D.72" as soundtrack for -surprise- a black mass.