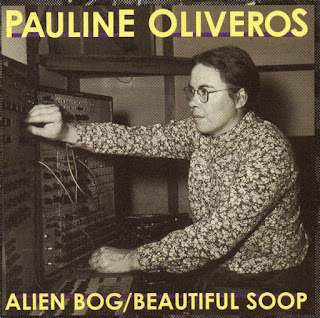 Musically cliched adjectives such as 'Seminal', 'Overlooked', and 'influenza'......shouldn't that be Influential?....I blame Covid syndrome,i simply can't talk about anything else.The government have done a job on us,and turned us into simpering rule takers who can't wait to download that government approved tracking app; singling out the undesirables like a remake of 'Invasion Of The Body Snatchers'!?This virus has answered all of their problems at once.Crime falling like a brick shithouse in a decaying orbit,pollution emmisions evaporating,the workforce forced to quit their jobs,for 'safety reasons', leaving automation as the only answer for economic growth;the population openly embracing the chance to be imprisoned, immigration ended,borders closed,and thousands of dead pensioners,saving millions of quid a year.....it is,after all,"for your own safety?"
...anyway, all those silly music reviewer clichés apply to Pauline Oliveros. If she was good-looking we wouldn't have heard of the Human League mark 2. That's 'if', she was around in the eighties,but luckily, she had that hispanic librarian chic look, that was popular in guitar music, but not in electronics, or avant-garde accordian music.
This collection of a couple of her early electronic noodlings suggest allowing a chimpanzee to run riot in a room with the original Buchla synthesizer within its limits,but covered with monkey chow.....Yes...I know chimps aren't monkeys!?.....i'm trying to make a very dull subject entertaining....CAPICHE?
Basically, i'm typing this while listening to King Crimson's "Larks Tongues In Aspic Session Reels", which is such a brutal exhibition of musicality and invention,that it makes these recordings seem like some child twiddling the knobs of a machine  that she doesn't understand.Yeah, its shit bascially, but most casual music fans, are frightened to say it for fear of appearing dumb. It's Avant-garde you dumbass!....eh?...oh yeah, good isn't it?......er...No it isn't. Something isn't 'good' because no fucker else were doing it....in fact they were,but as Pauline is dead,she's an overlooked electronic pioneer.
Usually, the 'Avant Garde' is an easy way for someone with zero musical talent to... 'get away with it'.Like the Abstract painter who has never painted a landscape or a still life.....if you forget the basics, its worthless. In this case, the music has been removed from the situation....so whats the point?
The worth of Pauline's doodlings, is that she was a woman doing it, more than the results,also she was a Hispanic Woman......I dunno if she was also a lesbian , to tick the third box or not, but two outta three ain't bad?
Her instrument of choice was the accordian,with which she made far more inventive use of,primarily drones, so obviously she couldn't really play that instrument either.
This ain't no "Larks Tongues In Aspic",which actually takes some effort, but it will make you seem 'Intelligent' if you leave it out on the coffee table.
"Fuck! Quentin's got an Oliveros!"....quick google her most critically acclaimed stuff or we is gonna look as thick as we actually are!....panic time!
Christ I hate myself!

DOWNLOAD the knob twiddling genius that is pauline HERE!
Posted by Jonny Zchivago at 00:35

"I dunno if she was also a lesbian"

Then you clearly haven't been paying attention. Go scrounge up the conversation between her and Annea Lockwood sometime. You can practically hear the drool, she wants her so bad.

Not that there's anything wrong with that, mind you. The above observations and theories are presented for purely informational and educational purposes. And porpoises. Aw, porpoises. Fa loves Pa.

You have got a bad case of CCP virus, lie down in a dark room with some Eno for company, and a glass of enos.

This reads like it was written by a Brexit-and-Boris-voting, Trump-admiring numbskull, who's solitary brain cell is on the verge of implosion under lockdown. Shameful. Presumably you only know a chimp is an ape and not a monkey because mummy chimp taught you the difference one day in the zoo where you grew up. Don't share things you don't understand. In other words don't share anything at all. Best regards, Frank VOD.

Who wrote that for you, you fat cunt? Almost literate.
You clearly have that traditional German sense of humour....ie none.
Of course the intellectual giant that you obviously think you are, understands this work more than Oliveros herself,or you read someone elses opinions,which is more likely. Or you are the proven liar that you are....ie Mutants sounds.
I think we just edged closer to making that new sharing website dedicated to a certain reissue label we all know and despise.

I wouldn't object to a posting of the complete "Keep That One, Nick" from the Larks' Tongue boxset. Still haven't heard that in entirety. Though Fripp might try and shut you down.

I think everyone has those unfortunate experiences. I recall a really long drive from a tour ages ago. We played Gong's Angel's Egg and couldn't find anything to play after it, because, basically, everyone else sound like talentless hacks. Kinda disheartening.

Hi Jonny, not frank here, but was wondering what you mean when you reference mutant sounds in that post? did frank ever claim to be one of them?

dear anon, good god NO, he was't anything to do with Mutant Sounds, but he/frank did claim to have Sold Jim Mutant two hundred tapes,over which he seemed to claim some kind of weird ownership even after they were,allegedly sold; and had a problem when Jim posted them on his groundbreaking blog. The trouble is Jim says that he didn't buy anything from Frank whatsoever,and its a big old lie. The guy seems to think he owns everything he touches.Despicable rich boy.

Part of the Oliveros mystique is all about the San Francisco Bay Area. I lived there for a not-inconsiderable length of time. One of the things I noted there is the locals' tolerance for really crap art from fellow locals. These early Oliveros recordings are very crude but they came from The San Francisco Tape Music Center. Therefore, snobby aesthetes who frequent run-down galleries find it thrilling because San Francisco is all they got. For all I know, the San Francisco Tape Music Center was two quarter-inch reel-to-reel machines and a mixer crammed into a former washroom. Certainly sounds like it. I can guarantee you that any public debut of these recordings was likely accompanied by a "modern" dance routine thrown together in an afternoon. Isn't this stuff just crying out for the awkward thud of a flailing dancer raising a dust cloud from an ancient warehouse carpet?

I honestly like her "deep listening" stuff on the accordion. I bet she was a fun old lady.

Yeah, i also quite like her accordian stuff,mainly because she can almost play the accordian for starters.
What i've got against most early synth stuff, is that they are obviously just sitting there twiddling the knobs for half an hour...which i can do anytime i fancy if i had vintage Buchla Synth in my living room. Then they could fit some arty explanation on it afterwards....in this case years afterwards because these tracks weren't released until deecades after.
Here in our local poetry festival, here in France, i have witnessed a ballet dancer dancing to poetry!....i stood open mouthed.....i in fact knew the dancer...she used to be in Hills Angels on the Benny Hill show in the eighties, which was a kind of poetry i guess?