Delia Derbyshire and Barry Bermange -"Inventions For Radio No.1: The Dreams" (1964) 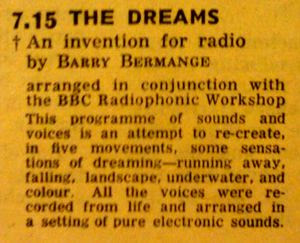 "Dreams" was made in collaboration with Barry Bermange (who originally recorded the narrations). Bermange put together The Dreams (1964), a collage of people describing their dreams, set to a background of electronic sound,provided by Delia Derbyshire.In true BBC style, Delia's name isn't mentioned in the Radio Times listing,it's just the BBC Radiophonic Workshop that gets the collective credit.

However, Dreams is a rather sinister collection of spliced and reassembled interviews with people describing their dreams, particularly the recurring elements,represented here in five movements,such as running away, falling, landscape, drowning, and colour.The stuff of nightmares.
These programmes,only designed to be broadcast once,then earmarked for erasure, with Barry Bermange,are arguably Delia's second greatest moments......the greatest, much to her chagrin, is obviously the original Doctor Who Theme;but artistically,Inventions for Radio blow that proto-synth pop miesterwerk out of the very water that the subjects of this broadcast were drowning in.

DOWNLOAD into your dreams and nightmares HERE!
Posted by Jonny Zchivago at 00:47

Thanks for the Delia Derbyshire posts, but I'm unable to downlaod this one. I tried many times, but Google keeps telling me too many others have viewed the file.
I need to hear this: I hope she does the being stuck in a rabbit hole dream.

Too many people downloading ATM, who knew DD was so popular

dear Anonymous.... i can't recall any weird noises ones...but maybe it was an album called radiophonics,or BBC radiophonic workshop 21..which are coming up....maybe it was from the time when i got deleted in 2012...hang on because i got loads of stuff coming up. God its fucking great.

This is the first time this too many people are downloading shit has happened!...its great that DD is now so appreciated...i'm getting emotional!?

Very cool! thanks for sharing. Perhaps tempting fate, I listened to this last night just before bed. Enjoyed it very much. It's bizarre to me that this was broadcast by the BBC. In 1964, no less!

Any idea why there are two versions of this? The tag at the end of the longer one suggests it was a re-broadcast?

All things considered, it's a wonder that this was not lost entirely.

@ sean... I assume you're gonna play the other two and bit Inventions for radio?
The 1964 original was squeezed into a shorter slot than the rebroadcast(in 1977). I guess the powers that be at the Beeb in 1964 were not that enamoured with this weird stuff,so the shorter the better. It must have sounded from outer space to the stuffed shirts in BBC board room,and to most of the public.

Thanks! Do you have her Electronic album as well?

Yeah the electronic album is here in a different form...i think it was one of those KPM releases....just do a search on the blog for Delia