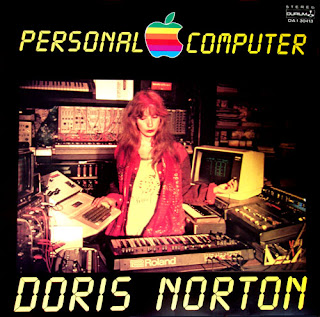 Italian by marriage,Doris Norton originated in ye olde London Town,which is not surprising with a name like that. After a dalliance with Prog Rock as the obligatory keyboard player surrounded by machinery,and often playing two synths at once, Doris took the popular Kraftwerk-y route and made a handful of heavily programmed minimal synth albums....sponsored by Apple Computers!?
I guess that Apple were expecting her to sell a bucket load of music software for their nascent computer system.Alas they were sadly mistaken,as no-one's ever heard of her outside of Italy.
Lots of luvly phat analogue synthesis is going on here,from the year before Digital synthesis fucked up all the fun.

DOWNLOAD dotty doris and her tasty Apples HERE!
Posted by Jonny Zchivago at 20:11

Yeah, analogue is better, blah blah blah. Unfortunately in this case that doesn't change the fact that this is a heaping pile of codswallop. The whole "vintage retro" thing has caused a lot of people to get all swoony about some stuff that was shit when it came out, and is still shit now. This is one of those pieces of shit.

Of historical interest? Perhaps. Of any artistic merit whatsoever? Pull the other one.

And she's got a boring name like all the other british TD wannabes: Rick Crane, George Garside, Carl Matthews, Dave Jones...

Awww Frothy! Don't be like that.....lighten up a bit...no wonder you were on the 7 dwarfs subs bench.
Its music of a syle that will never be made again,and the synths sound luverly...thats all....no-one's saying this is the Cistern Chapel of Electronica....I like the cover too.

@ Northfieldhat....ahh yes ,the british electronic underground, the names were bland and the music was too. Integrated Circuits etc..Colin Potter was the head honcho...only boring names allowed it seemed,but aren't all british names boring?...sadly, Doris was not part of this scene,even though she had the name for it.

hahaha ... nice that peeps get excited. bird in a nice jacket pretending to know what she is looking at (and lord alone knows that i know how that feels).

sorry ... i also meant to say that i've wanted someone to pull my other one (well any of them to be honest) for a really long time. pass on my contact details ... he sounds kind of cute

As I said - as a (somewhat) evocative time piece, OK. (And I think there's a lot better to be had than this for that purpose anyway.)

But let's just also not forget to call something a turd when it is a turd on the actual content front, is all I'm saying.

Not to be all shallow and such, but has anyone noticed that an awful lot of these synth ladies are kinda perty? Norton, Miquette Giraudy, Mark E. Smith's ex-wife, and, of course, Suzanne Ciani.

Mr badger stump, are you wanting frothy to make you frothy?.....there are other websites for that kind of vulgar behaviour.....chief super says 'we are monitoring you'.

This blog is full of evocative timepieces....Norton hasn't appeared,so now she does....mainly because she's a woman in a nice jacket.
Its not my style to call a turd a turd...unless its Bill Laswell,or Fat Frank of Vinyl-On-Demand.
i find musical Turds a challenge,and challenging music, unchallenging.Having listened to millions of hours of music,there's nowhere left to go except exhuming turds.
Go On...name me something that's 'Good'!?

Welllll... one of dem crazy British labels has, all of a suddenlike, decided to release a fancy-schmancy, shiny new vinyl comp of one of my previous bands. I'm biased, but I reckon it's good! And I shall be shamelessly promoting said product in the forthcoming months. It hasn't got a title yet, so it's presently _untitled_ compilaton.

@parmalee...Oh go on, tell which band it is....is it Hootie and the Blowfish?

Sorry, I got distracted by this ad for... combat lightsabers! Apparently they're using those things in wars these days? Anyways, the particular band in question was Urdog, or urDog, whose anti-digital campaign was so successful that there's only a handful of songs that wound up on youtube--and they're not even the good ones (except Ice on Water, that one's pretty good). The still untitled vinyl compilation will ONLY feature the good songs though.

Remember that episode of Friends where they went to see Hootie and the Blowfish? I still have no idea what they sound like, I just know they suck and I figure they're probably along the lines of that Dave Matthews Band shit or something.

Urdog.....like it,my kinds stuff.Droney psych.....so I won't be posting it all here then if you got an album coming out? Lol!.....unless its on Vinyl On Demand then i'd consider it. It reminds me of an album i'm on 'Meat Kiosk'(2012)...thats on YouTube too.Except we don't sing,or have guitar freak-outs on it...thats for sell-outs.

Oh God...the Dave Mathews Band...hasn't anyone killed them yet?...maybe we could ask Hootie and the Blowfish to do it?...kill two birds with one stone sort of thing

are you a Phill Collins fan or something like that?